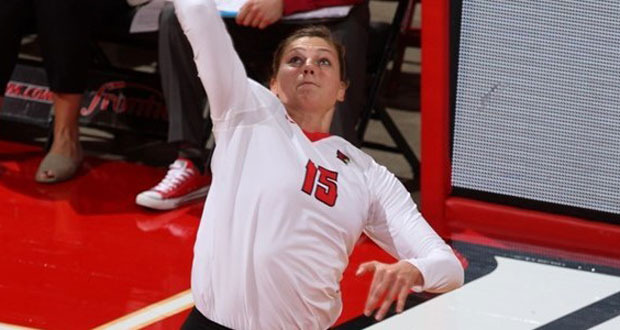 Ashley Rosch is part of our Players of the Week award winners after setting a new career high in kills. (Illinois State Athletics)

Maddie Palmer, Radford, Soph – Palmer produced eye-popping numbers for the Highlanders last week in victories against Norfolk State and Robert Morris. She put up a career-high 28 digs in taking down Robert Morris. Her incredible defensive effort was backed by a strong offensive one, registering 17 kills and hitting .350. Against Norfolk, she hit .400. She also added double-doubles in contests against Toledo, where she went for 19 kills and 17 digs, and Cleveland State, going for 17 kills and 19 digs. For the week, she totaled 66 kills (4.40 per set), 71 digs (4.73) and 70.5 points (4.70).

Gabby Simpson, Colorado, Soph – Helping the Buffs to a 4-0 record last week, Simpson was named the Omni Invitational MVP. She exploded for a career-high 21 kills and hit .372 in the opener against Montana State, adding four blocks. She also struck for 16 kills against George Mason and 13 against Air Force and made nine blocks between the two outings. For the week, she averaged 5.68 points, 4.71 kills and 1.07 blocks per set and hit .303. Simpson was PrepVolleyball.com’s Senior Ace No. 15 from the Class of 2014. Ashley Rosch, Illinois State, Sr – Rosch paced Illinois State in kills last week, including all three matches at the Flyer Invitational. In the Redbirds’ five-set victory over Jacksonville she set a new career high with 27 winners. It was part of a four-match stretch in which she tallied 71 kills (4.18 per set) and 51 digs (3.00) added to five aces and 11 blocks. Rosch currently ranks third in the conference in both kills (3.84 per set) and points (4.38). Khadijah Wiley, East Tennessee State, Sr – The senior from Columbus, Georgia was instrumental in three Bucs’ three victories. She registered at least four blocks in all three matches, helping her land at 21st in the nation in blocks per set at 1.48, which leads the Southern Conference. In sweeping Marshall, she recorded seven blocks. Offensively, she totaled 31 kills with a .377 hitting percentage. Ty Laporte, Ole Miss, Sr – Laporte’s performance last weekend earned her MVP of the Fight Like Hal Memorial Tournament. She ended the event with 37 kills, a .544 hitting percentage and averaging almost a block per set to lead the Rebels to the tournament title. For the week, Laporte averaged 3.47 kills and 1.00 blocks per set and hit .506.

Harlee Kekauoha, UC Irvine, Fr – It was a huge weekend for the freshman, as she was part of the Anteaters’ upset of San Diego. There, she registered 13 kills and seven digs while upping her personal-best total in block assists to seven. She also had an errorless outing against UCLA, putting down 16 kills on 28 swings and hitting .571. She set a career-high the next night against Oregon State, depositing 18 kills and hitting .441 to go along with six block assists and three service aces. For the week, she averaged 4.27 kills, 2.09 digs and 1.27 blocks per set while hitting .363.

Brittany Maxwell, DePaul, Fr – DePaul pulled out a pair of five-set victories over UTEP and Southeast Missouri State before sweeping Bradley. It was Maxwell earning the Bradley Invitational MVP after averaging 3.96 points and 3.69 kills per set and hit .350. It featured her setting a new career high in kills with 21 in downing Southeast Missouri State. Janey Goodman, James Madison, Jr – Goodman was picked as the MVP of the JMU Invitational by guiding the Dukes to a 3-0 record and totaling 41 kills (4.1 per set) and hitting .287. She also contributed 19 digs and 10 blocks as Madison moved its team record to 10-3 on the year, which is the program’s best start since 2005. In the tournament-opening victory against Georgetown, she recorded her fifth double-double of the season with 19 kills and 10 digs. Lauren Greenspoon, Chattanooga, Soph – With an average of 11.47 assists per set, Greenspoon led Chattanooga in that category in all four victories last week. In the big upset of Virginia Tech, she notched 50 assists, her high mark of the week. She had 34 assists in sweeping Kennesaw State and 40 in sweeping Liberty.

Avery Acker, SMU, Sr – Acker was named the Most Valuable Player of the DoubleTree Invitational over after compiling an average of 13.92 assists per set and helping SMU hit .287. Acker surpassed 60 dimes in two of three matches – including establishing a new conference record with 67 against TCU. She also added 18 digs. She dished out 61 assists against UTSA and had a double-double against Clemson with 39 assists and 12 digs.

Aubrey Ezell, South Carolina, Fr – Ezell fueled the South Carolina’s best offensive weekend so far, passing out 120 assists in three victories at the Carolina Classic. She recorded her seventh double-double of the season, finishing with 48 assists and 16 digs against Charleston Southern. Ezell also set a career-best with five kills in the match. She then matched a season high with three aces against Wofford and added 37 assists and 12 digs for another double-double.

Abby Monson, Michigan State, Soph – The Spartans turned in their strongest weekend of the year so far by beating Duke and North Carolina. Monson was a magnet against Duke, recording a career-best 22 digs. She also put up 19 digs against in the Tar Heels. It was good for a 5.9 digs per set average for the two contests. Haley Smith, LSU, Sr – Smith was named the Lobo Invitational MVP with a 5.27 digs per set during LSU’s three victories last weekend. She led the team in digs in two of the three matches, with Smith setting a season-high 25 in the five-set win over the Lobos. Okiana Valle, Arkansas, Fr – It was a monster week for Arkansas, which upset Kansas State and Wisconsin and Valle was a back-row vacuum. She posted a match-high 17 digs against the Badgers. Her 26 digs against Kansas State were part of a 95-dig outing by the Razorbacks in taking out the Wildcats. She finished the weekend averaging 3.92 digs per set.