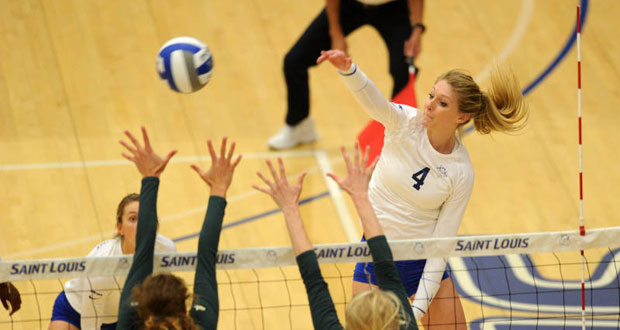 Saint Louis outside Danielle Rygleski is among those featured in our Players of the Week after helping her team to a big victory over Missouri last week. (Saint Louis Athletics)

Samantha Bricio, USC, Sr – In knocking off Stanford in a key Pac-12 Conference road victory last week, Bricio recorded a career-high 34.0 points during the five-set thriller. She added 10 digs as well, going with 27 kills and five aces. She sent down a more modest 14 kills in sweeping UCLA earlier in the week. This is Bricio’s second PVB Player of the Week honor. Abbey Bessler, Xavier, Jr – Bessler led the Big East with a 5.82 points per set average, including 5.55 kills per set as the Musketeers started 3-0 in Big East play. She added 3.91 digs per set, totaling 43 for the week, while chipping in with four blocks and a service ace as well. The big news was her setting a school record with 33 kills as Xavier rallied from two games down to defeat St. John’s in five. The 33 are the most for a Big East player this season. In the upset victory against Marquette, Bessler notched the 1,000th kill of her career. Against Providence, Bessler put up 12 kills and 21 digs. Danielle Rygleski, Saint Louis, Jr – Saint Louis’ winning streak reached 11 matches, including a huge sweep of in-state rival Missouri, which was the program’s first loss this season. In three matches last week, Rygleski combined for 58 kills (5.27 per set), nine service aces and a .389 attack percentage. She also sent down the 1,000th kill of her career while hitting .556 in the win over previously undefeated Missouri. She followed that with a 22-kill, nine-dig performance and hitting .349 in a conference-opening road match against La Salle. Rygleski’s week ended with a 19-kill, 12-dig double-double in downing Duquesne, where she hit .326 and had four aces. For the week, she recorded nine aces and eight blocks as well. Rygelski scored 71.5 points last week, 37 percent of SLU’s total points. Kirsten Overton, Temple, Jr – Overton paced Temple with a .594 hitting percentage and 3.67 kills per set to help the Owls to a 2-0 start in American Athletic Conference action. The junior opened the weekend with 12 kills and just one error, hitting .611 with four blocks in sweeping USF. On Saturday, Overton produced 10 kills on 14 swings, hitting .571 with a block in a topping UCF. The Royersford, Pa., native leads the conference in hitting percentage (.466) and has recorded 117 kills in 47 sets this season. Maddie Slater, Northwestern, Jr – Slater hit over .400 in victories against Rutgers and Maryland. It featured an impressive 7-of-9 performance in the Wildcats’ 3-0 win at Maryland on Saturday. Against Rutgers, Slater totaled 11 kills to lead all players. The junior added six blocks and an assist over the weekend to highlight the Wildcats starting 2-0 in Big Ten play. Slater leads the team with a .412 hitting percentage for the season and ranks fourth with 94 kills and 2.19 kills per set.

Emily Astarita, Dartmouth, Jr – Dartmouth squeaked out a five-set victory over Harvard in the Ivy League opener last week, with Astarita playing a vital role. She led Dartmouth with 23 kills and also had seven digs. Earlier in the week, she posted a team-high 21 kills in a loss to Bryant. For the week, she had 61 kills, 27 digs, eight block and four aces for a total of 69.5 Pts.

Brooke Morgan, Kentucky, Fr – Morgan racked up 20 kills over the weekend in two starts, both road wins against South Carolina and Florida on a .411 hitting clip. She added three digs and two blocks on the week. Morgan set a new career-high with 13 kills in upsetting the Gators, hitting .500 on 24 swings. Her weekend included hitting a combined team-high .410 in both wins. Morgan helped the team to the first road win in Gainesville since 2009 and first win over a top-five opponent since 2013. Abreia Epps, Charlotte, Soph – Epps had the best week of her career, breaking her previous personal high in kills during all three matches as the Niners went 2-1 in Conference USA play. The redshirt-sophomore entered the week with a career high of 14 kills, but shattered it with 21 kills on a .415 hitting percentage in a four-set, conference-opening win over UTEP. Epps also tied a career high in the match with a pair of solo blocks. At Marshall, she pounded out 18 more kills and hit .300 hitting, while setting a new career high with five block assists. For the week, Epps averaged 4.23 kills per set while hitting .354. Additionally, Epps recorded 13 total blocks with 62.5 points on the week. Emma Anderson, South Alabama, Soph – Anderson began the week by recording a season-high 52 assists against Alabama State, helping the Jags hit .336 for the match. She recorded 17 assists in Game 4. On Saturday, she tallied a double-double against Georgia Southern with 44 assists and 11 digs. For the week, she totaled 96 assists (12.00 per set), 20 digs, five kills and four block assists.

Julianna Dole, Rice, Fr – Dole played a pivotal role in helping the Owls kick off conference play 2-0. She put up 77 assists in six sets (12.83 per set) and recorded a double-double (33 assists, 14 digs) in Rice’s sweep of FIU. The freshman compiled a Conference USA season-high 44 assists in three sets against FAU and now has three of the top-five, three-set assists totals in the league this year.

Morgan Kath, Stony Brook, Fr – In helping Stony Brook to victories over Fordham and UMBC last week, Kath led the America East Conference with 11.00 assists per set and helped the Seawolves top the conference as a team with a .289 hitting percentage. Her efforts included 34 assists and six digs against Fordham and 21 assists and three digs against UMBC. For the year, Kath leads the conference-leading with 9.13 assists per set. Rylee Hunt, Niagara, Soph – Hunt extended her double-digit digs streak to 23 matches as the Purple Eagles opened their conference schedule with sweeps against Fairfield and Quinnipiac. Hunt had 26 digs with a perfect reception percentage and eight assists in Niagara’s five-set triumph over Fairfield. She also tied a career-high with six aces, including four in the third set, in the Purple Eagles’ sweep of the Bobcats on Sunday. Maurissa Leonard, Toledo, Fr – Leonard topped the Rockets with 5.11 digs per set, which featured a career-high 32 saves in UT’s five-set home loss to Ball State. She also committed just one reception error and posted a .98 serve reception percentage against the Cardinals. Leonard was perfect in 24 serve receive attempts and tallied 13 digs in the third set and 10 in the second. She followed that up with 14 digs and committed just one reception error in 17 attempts in the next outing.

Erika Figueroa, East Carolina, Sr – Holding down the East Carolina defense, Figueroa finished the week with a 5.88 digs per set average and committed zero reception errors in 40 attempts. In a 3-1 win against Memphis, the senior registered a match-high 25 digs and surpassed the 1,000 career-dig mark. Figueroa now ranks eighth all-time in career digs in school history. She started conference play with 22 digs against Cincinnati on Friday.