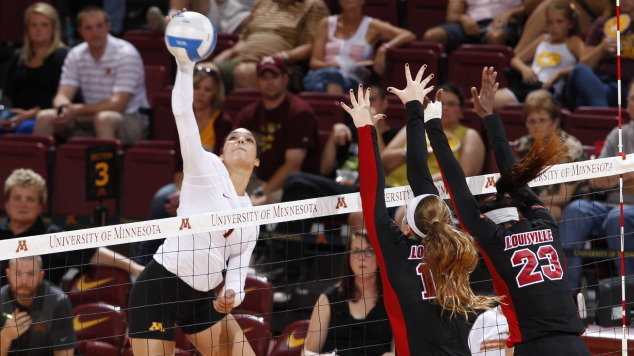 Minnesota’s Daly Santana goes on the attacks against Louisville, something she did quite often in racking up 39 kills. (Minnesota Athletics)

Welcome to our Weekly Awards section, which we plan on releasing every Tuesday throughout the season.

PREPVOLLEYBALL.COM PLAYERS OF THE WEEK

Daly Santana, Minnesota, Sr – One of the things we look for in searching for our Players of the Week is somebody who hasn’t done something they did before. Meet Santana, who blistered Louisville for a career-high 39 kills last Friday. How remarkable a number is that? Santana, who was part of the Puerto Rico National Team for the 2012 Pan America Games, matched her previous career high of 23 kills in the third set. She finished with 93 swings and hit .280. Santana had much more modest numbers in a sweep over North Carolina the following day, posting 13 kills on 45 swings. However, the Gophers, after opening 0-2, desperately needed to get on track against Louisville and it was Santana delivering the best outing of her career.

Kia Bright, UCF, Sr – Pounding out a career-high 29 kills against North Dakota, it was part of a strong overall weekend for Bright as she helped UCF to the Omaha Classic championship. She picked up tournament MVP honors after producing double-doubles in all three matches. Against Drake, she went for 20 kills and 18 digs. She backed her 29 kills with 14 digs, then finished the tourney with 12 kills and 11 digs against Omaha. She ended weekend with an average of 6.10 kills per set, hitting .314 hitting to go with 4.30 digs per set.

Haley Pa’akaula, Towson, Sr – From Hawaii, Pa’akaula made sure it wasn’t a day at the beach for her opponents when they faced Towson over the weekend. She collected the MVP award of the North Dakota State tournament. It included her going off for a career-high and school-record 30 kills in topping Utah Valley on Saturday. She concluded the weekend with 55 kills (4.23 kills per set) while hitting .377. She also added 38 digs.

Caitlyn Coffey, DePaul, Soph – The former Milwaukee Sting club player was a monster in the middle for DePaul, which won its own tournament as Coffey was named MVP. She led the conference over the weekend in hitting percentage, torching opponents for at a .586 clip. She totaled 47 kills in three victories, including a career-high 21 kills on 32 attacks in a victory over Evansville.

Taylor Sandbothe, Ohio State, Jr – Prepvolleyball.com’s No. 25 Senior Ace in the Class of 2013, Sandbothe was a major contributing factor for the Buckeyes over the weekend. Ohio State claimed the Sports Import DC Koehl Classic title as Sandbothe garnered Most Outstanding Player honors. More importantly, after a loss to Wyoming to open the season, the Buckeyes flashed their potential in taking down Florida State twice on the weekend. Sandbothe averaged 3.5 kills per set and a .521 hitting percentage in three matches. It featured her going off for 17 kills in the first victory against Florida State. She was named the Big Ten Player of the Week for the first time in her career for her weekend performance.

Breena DeYoung, Utah, Sr – While Utah is still searching for its stride in 2015, it appears DeYoung might have found hers. She was named Pac-12 Defensive Player of the Week after setting a new career high in blocks with 11 in helping the Utes knock off Gonzaga in five games. She had at least six blocks in all four matches last week, ending with 34 total. She averaged 1.88 blocks and 1.25 kills per set.

Aiyana Whitney, Penn State, Sr – After a pedestrian showing in Penn State’s sweep over Colorado, Whitney laid it on Stanford good in the Nittany Lions’ victory there. She tied for a team-high 13 kills, tied for a team-high three blocks and was second with a .440 hitting percentage. She led the team in total points with 14.5.

Jaila Tolbert, Virginia Tech, Fr – Helping MN Select 18-1 to a tremendous club season, Tolbert is now giving the Hokies contributions as a rookie. Though her first two outings of the weekend weren’t anything special, she was still fairly consistent before turning in her best performance when Virginia Tech needed it most. The Hokies knocked off Michigan State in four games, marking the first time the program has defeated a ranked Top-25 opponent on the road. Tolbert led the team in hitting with .308 and dropped six kills and a block.

*We had trouble finding a third opposite for this week. Future nominees can be sent to chris@prepvolleyball.com Jo Wilks, Furman, Sr – Wilks was a pivotal piece in Furman’s 3-0 weekend. It featured victories over Clemson and South Carolina. A native of Union Grove, Wisconsin, Wilks averaged 12.54 assists per set during the Carolina Classic. Her best outing came against Clemson, when she registered 59 assists. She was named MVP of the tournament and she currently leads the Southern Conference with an 11.76 assists per set average.

Samantha Seliger-Swenson, Minnesota, Fr – For those who watched Seliger-Swenson during her days with Northern Lights, it figured it wouldn’t take her long to make a dent once she arrived at Minnesota. After an opening weekend in which the rookie had some struggles, she responded mightily in victories over Louisville and North Carolina. She set a career-high mark of 59 assists against the Cardinal, a number that she is sure to surpass in the next four years. She also chipped in with 15 digs in beating Louisville. For the weekend, she averaged 11.9 assists per set. She was named Big Ten Setter of the Week, making her the first Gophers setter to be selected since Alexandra Palmer in 2012. Stephanie Aiple, Texas A&M, Soph – The Aggies continued their strong start to the season by going 3-0 last weekend, including topping New Mexico State in five games. In that contest, Aiple tallied 60 assists, 14 digs and five blocks. For the weekend, she totaled 123 assists. The 60 assists were a career-high for Aiple, as was the five blocks.

Olivia O’Dell, Houston, Sr – O’Dell was selected to the Sawyer Camillo Memorial Classic All-Tournament Team after a strong weekend. She posted an average of 6.17 digs per set to help Houston claim the title. Sticking with the underlying theme, O’Dell had a career outing twice this weekend. Against Nicholls State and then again against UL-Lafayette, she put a career-high 29 digs. For the season, O’Dell is averaging 5.89 digs per set.

Maddie Hubble, UC Riverside, Jr – It was a tough weekend as a team for the Highlanders, but Hubble was a back row beast. Despite UCR going 1-2, she still managed to earn Big West Defensive Player of the Week honors. She ripped off 5.45 digs per set in the three matches, racking up 32 digs in a five-set loss to Nevada. She currently leads the Big West with 127 digs.

Elyssa Mulheron, Western Carolina, Sr – The Winston-Salem native put out an impressive week for the Catamounts, totaling 98 digs during five matches. That’s good for a per-set average of 5.16. She compiled 25 digs in a 3-0 sweep of UNC Asheville. Then she recorded 26 digs against George Mason on Saturday. She added 15 digs in three sets against Big Ten foe Maryland on Sunday.