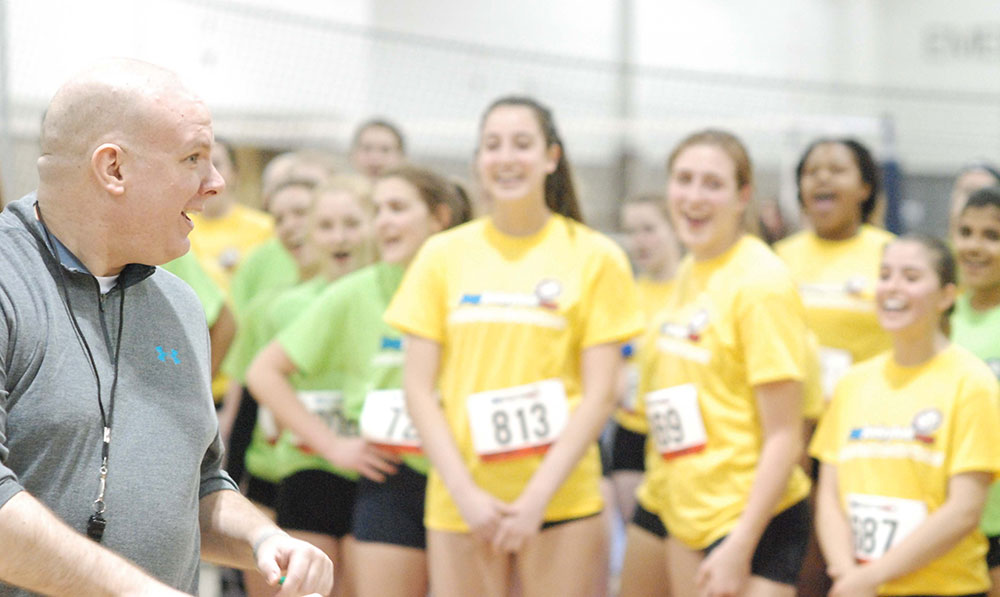 Networking sometimes gets a bad rap in our industry. It can seem smarmy and the adage that “it’s not what you know, it’s who you know” can hold some truth when it comes to job hunting. But negative connotations aside, networking is also a wonderful part of the coaching life and, in general, is a major part of the human experience! I have been so blessed to have a great network of friends in the coaching community and it has never shown up more than in the doors that have been opened to me on these journeys across the country to observe and learn.

The reason that I bring this up to begin this two-part installment is that this trip to the “Big South” simply worked out because a couple of old friends in an area close to my family were willing to let me pop in on a whim. I wasn’t traveling to North Carolina as part of this observation series; but when I planned a trip to the Charlotte area to see my nephew compete in sixth-grade football, I thought I’d reach out and see if my friends, Leo Sayles at Gardner Webb and Chuck Rey at Winthrop, might let me stop by. They both were more than welcoming, and my personal trip easily morphed into a business one!

Program and Season Context: Chuck Rey is in his first season as head coach of the Winthrop University Eagles. Many of us in the coaching world know Chuck from the session he does every year at the AVCA convention for first-time attendees and from his fantastic coaching blog www.coachrey.com. I’ve been fortunate to call him a friend for several years, having kept in contact with him since my first convention about ten years ago. This is his first time as a head coach at the college level after having spent several seasons as an assistant at Winthrop and most recently at Miami University in Ohio.

When I visited, the Eagles stood at 9-10 overall but had won eight of their past 11 and were 5-2 thus far in conference. His team was really starting to grasp his systems, and his scouting and game-planning abilities were beginning to pay off in the win column. Today, they were preparing for a match the next night at Campbell University (which they ended up winning 3-0), so while going at a pretty high pace, they weren’t going to tax themselves too hard at the session I attended. Overall, they are pretty healthy and were only missing one player due to a class conflict.

Practice Set Up: Winthrop University’s athletic complex is located about a mile from the main campus on a beautiful parcel of land in Rock Hill, SC (20 minutes south of Charlotte). They share the Winthrop Coliseum with the basketball programs and most of the athletic offices are housed there as well. For today’s practice, they only set up a single main court. The Winthrop staff is made up of two assistants plus a volunteer. Coach Rey had the practice plan drawn out on paper (no white board) and each of his assistants had a copy. They also had a table set up with their main scoreboard and clock ready to go.

Scouting and Game Planning: The day began with a team meeting in the volleyball conference room. Coach Rey was gracious enough to meet with me beforehand to walk me through the amazing detail that he and his staff produce in their scouting reports. While not sharing too many trade secrets, I can say that I was blown away by how much time they spend in research to produce analytics that help them predict what to expect. They also keep some very interesting statistics on their own play that they are constantly analyzing for trends. It was truly volleyball nerd heaven and really got me thinking about the role that this level of analytics can play in our game.

Stat/Tracking Note: One of the things that I immediately took back to my gym was their tracking of “Conversion Percentage,” which is their rate of converting digs to kills. This is such a huge concept that gets overlooked because the raw stat in the box score is just “digs.” Who cares about digs if they aren’t leading to anything!?

System Note: Coach Rey is implementing a system of multiple defenses, an audible-based defense based on reading the quality of the opponent’s pass. They have one set up against in-system passes or “ON” and a different one for out of system passes or “OFF.” While most teams make defensive and blocking adjustments based on the pass, I’ve never really seen it done in this way and it seemed effective not only in better defensive positioning but in making sure everyone was engaged in reading the quality of the pass.

Cue Note: Winthrop uses a cue for setter dump coverage that I really liked. Much like a linebacker in football who tracks a running quarterback, they assign players to “spy.” The descriptiveness of this cue really fits exactly what you want your defender to do against an aggressive attacking setter.

On the Court: Following the scouting meeting, the players took the court and were pretty much in charge of their own warm up. They went through various movements and some basic pepper until Coach asked if they were ready to go. After a quick huddle in which he went over the practice plan and some housekeeping items, they set up a competitive team pepper from serve receive and from overpasses. I was intrigued to see some rallies begun with overpasses but apparently, they hadn’t handled a few the way they want to in their previous matches. Is there anything more frustrating than not taking advantage of an overpass!? They went through several rallies in each rotation before moving on to some serve-receive work.

Culture Note: Sometimes after a rally, a player would run and touch the net standard and then run back to their spot. I knew it had something to do with defense, but I wasn’t sure exactly what it was and had to ask. Coach explained to me that they had a bad habit of reaching for balls with one hand that they could get with two. To counter the habit, any time a player goes with just one arm, they run to the pole and back. Like all the other gyms I’ve visited that have consequences attached to bad performance, this didn’t have huge fear attached to it and was generally a groan and call yourself out type thing that reinforced a concept.

For their serve-receive work they did a drill they call “USA 50.” To set it up they put twenty minutes on the clock and had three passers on one side and the servers on the other. Every five minutes, the passers would switch. The goal was to get to fifty perfect passes in the 20 minutes with the servers going hard. Assistant coaches were the targets and were busy taking stats during the drill. It was a bit of a struggle to get to the 50, but everyone was in agreement that it had a lot to do with the servers really being on point today!

After “USA 50” and a quick drink break, they moved into some game plan work in which the “B” side mirrored what their opponent would be running in each rotation. The focus was on how they would be blocking for this match…

Cue Note: They wanted to make sure that their blockers were getting up early enough, so they talked a lot about “getting wide early” and “beating them off the ground.”

System Note: I found one of their blocking strategies really interesting in that they had decided to line up taking away line against a certain hitter, but to help their middle by reaching back in.

Following the game planning and blocking work, they played a straight up game to 15 and then did a bit of serve work to finish up.

Overall, it was a short practice, but I picked up a lot in the hour and a half. I really admired the way Coach Rey interacted with his team. He’s still building trust in his first season, and he is doing it naturally and through competence rather than by demanding it. His calm demeanor and immense preparation make him easy to trust and he was becoming armed with more and more on-court evidence that his process was working. (So much so that by the end of the season, Winthrop finished 11-5 in conference, garnering him Big South Coach of the Year honors!). I love the way he called attention in the huddle to a player who had gotten a weekly conference award. He explained how it’s good to celebrate the individual success but also recognize that those things happen because their process and systems are working, and team success leads to individual recognition.

So, after visiting Winthrop, what do I think makes Coach Rey great? First off is something I’ve known since I met him; he’s genuine. Self-deprecating and generous, you never feel like you have to impress him or that he has a hidden agenda. I can absolutely see why players would want to play for someone who never seems like he’s just using them or playing mind games with them. The second thing I would point to is his intelligence and innovation. He is clearly a coach who isn’t afraid to learn from others, but he’s not a copy-cat. He curates the best ideas from others while also developing some of his own to build systems and processes that just make sense. His competence and belief make it easy to buy into what he is teaching.

My day in Rock Hill with Coach Rey will stick with me for a long time. From the impressive analytics, to the tour of the city and campus that he took me on after practice, to our dinner and discussion on faith, job hunting, and the coaching life, he gave me so much to think about. Simply stated, I’m a better coach for having spent time with him. But the biggest takeaway for me is that it is so reassuring to see someone like him succeeding at a high level through competence, hard work, and a genuine desire to help people. There’s nothing fake about him or his success, and I would predict that that authenticity is going to drive Winthrop Volleyball to great heights!