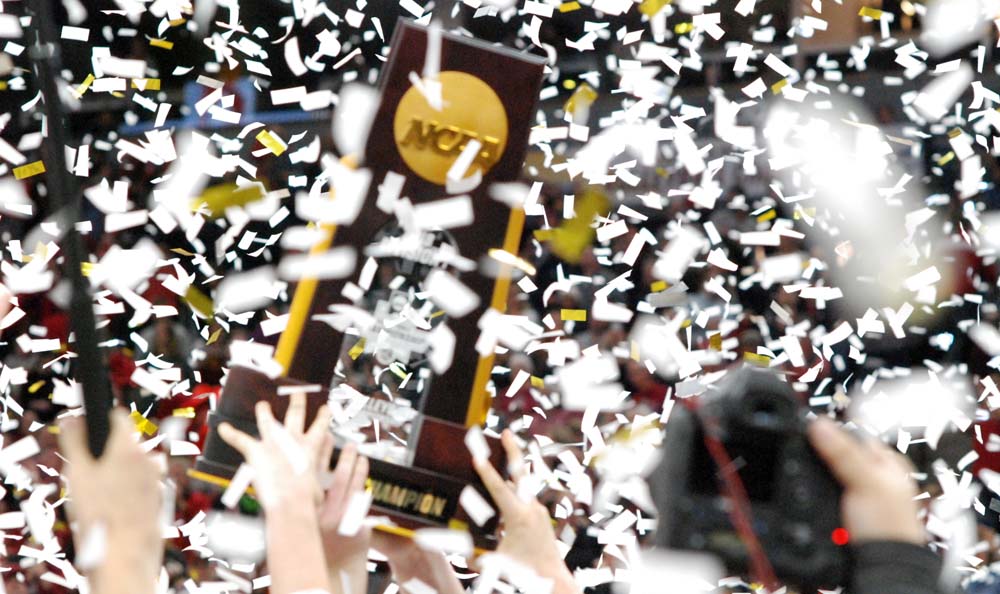 Meghan McClure didn’t have a lot of kills but her seventh Saturday night is one the sophomore will never forget. The outside hitter attacked from the back row off the block and down to complete a stunning five-set win over Nebraska, which secured the top-seeded Cardinal’s eighth national championship of all time, an NCAA record.
“It’s why they came here and the expectation they had,” said Stanford head coach Kevin Hambly, whose team finished on a 32-match winning streak.

“I don’t know that I’ve been part of a match that was, I don’t know, more interesting, more hard-fought,” said Hambly. “The turnaround they had after Set 3, then the turnaround we had to make after Set 4, you just don’t see that very often in matches.”

“You could feel the swing of the momentum as the match went on,” said Nebraska senior libero Kenzie Maloney. “In Sets 2 and 4 there was no doubt in my mind that we were going to win. I’m sure they felt the same in Sets 1 and 3. It’s emotionally draining, feeling so high and feeling so low. They executed more than we did in the fifth set. Great game by them.”

“It was an exciting match,” said Nebraska head coach John Cook, whose team was trying to win its second national championship in a row and third in four years. “It had drama. It went back and forth. You know, if you look at the stats here, they had one more side out than we did. That’s how close it was. Congratulations to Stanford. They played really well in that fifth game.”

The fifth set was close from start to finish, which was appropriate for a match of this magnitude. Nebraska broke on top 2-0 but Stanford scored five of the next six to go on top. Nebraska knotted the set at 6-6 and the teams were tied again at 9-9 before Stanford scored five of the next six points to earn four match points. The 14th point scored when Sidney Wilson’s ace serve, initially ruled wide of the sideline, was overturned on a challenge.

Nebraska scored twice to make things tense on the Stanford side and the Huskers appeared to be on the verge of getting one closer on a mighty swing from Mikaela Foecke, who had a match-high 27 kills. But libero Morgan Hentz, who was named the final’s co-Most Outstanding Player along with teammate Kathryn Plummer, denied Foecke her 28th with a fantastic dig. In transition, setter Jenna Gray opted to set McClure from the pipe out of the back row and she delivered.

“I have confidence in every single one of our hitters,” said Gray. “I screamed at her to make sure she knew to be ready. We’ve been doing a good job of getting after it no matter what and Meghan’s been doing a great job of being aggressive the whole time. I had no doubts in her when I set her that ball.”

“Hentz made this phenomenal play and I hear Jenna running up to set the ball yelling, ‘Meghan, Meghan!’” McClure recounted. “I thought, ‘OK, Meghan. You’re going to get to hit this one.’ Kevin has been on us about being the attacker and not giving easy balls away. I went up and saw there was a seam in the block and decided to rip it, going after the hands. It was so cool that the ball went down. I tooled the block! I thought, ‘Oh my goodness! We just won the national championship.’”

Stanford finished five sets with 105 total points, one more than Nebraska. That’s how close it was. The Cardinal had the edge in aces, 9-2, and made only two errors in serve-receive compared to Nebraska. If you had to point to a difference in a match that to the end could have gone either way, there it was.

“Just looking at the stats, we didn’t side out as effectively as they did in Set 5,” said Foecke. “And I think when you’re only playing to 15 points, you have to side out very effectively. We let them get a few too many runs and weren’t able to come back. We fought hard at the end, but it wasn’t good enough.”

Plummer, the two-time AVCA Player of the Year, led Stanford with 19 kills but she had a lot of help from Audriana Fitzmorris, who had 14, and freshman Holly Campbell, who had 15 total and three crucial kills in the fifth set.

“I mean, she was clutch,” said Hambly of the freshman. “For her to be that clutch in this big of a moment speaks volumes about her hard work and also her heart.”

Gray finished with 57 assists and three kills, including a well-timed dump that extended Stanford’s lead late in the fifth set to 13-10.

“I talk about it a lot,” said Gray. “I’ve been telling people all season that I love to dump it when it’s late. I saw it was open so I just went for it.”

Hentz amassed with 32 digs, 13 more than anyone else on the floor. Many, which is typical for Hentz, were of the jaw-dropping variety. She also passed 14 serves without an error. She needed to be big for her team tonight and she was, because Foecke was a handful. The senior, who came into the match seeking to be named Most Outstanding Player for the championships for the third time in her four seasons, had 27 kills on attempts while adding 11 digs and passing rock-solid in serve-receive. 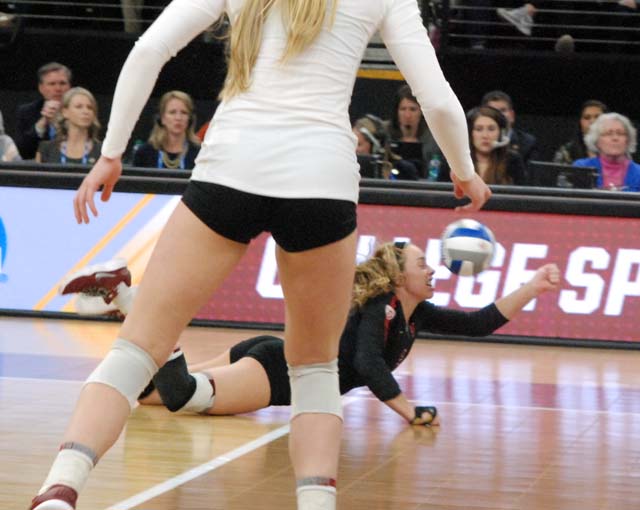 Hentz with one of her sprawling digs

“Foecke was unbelievable in that match,” said Hambly. “We couldn’t touch her.”

The two teams split the first four sets before clashing for it all in the fifth in front of a sell-out crowd of 18,112 at the Target Center in Minneapolis.

Stanford won the first set in an epic slugfest, 28-26, when Gray, with help from Campbell, roofed Sun’s swing straight down. Nebraska took advantage of a slow start from Plummer and great defense by Maloney and Megan Miller to open an early 9-4 lead. Stanford got back into the set with its serve. Kate Formico had two of five Cardinal aces in the stanza.

Plummer got untracked late, as Stanford built a 24-21, lead but Nebraska proved resilient and used strong play from Stivrins to send the match to extras. Stanford never trailed in overtime, however, and prevailed on the big roof. 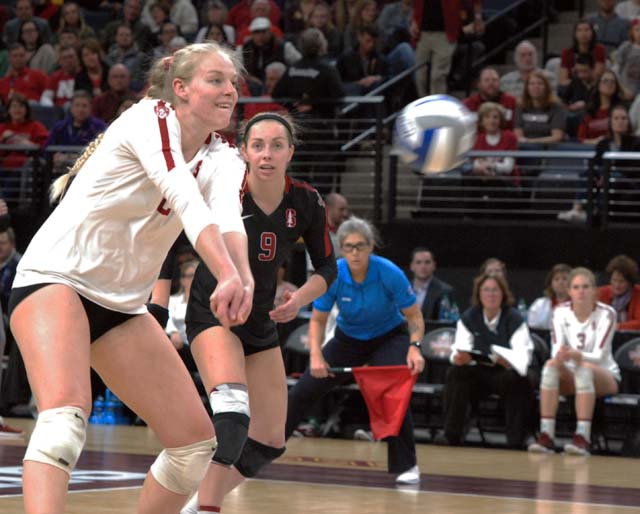 Plummer got it done on the ball control side as well

Nebraska got on the board with a 25-22 Game 2 win. Tied at 13-13, Nebraska went on a 7-3 run to take the lead, capped by successive kills from Foecke. Stanford got as close as 23-21 on a block by Tami Alade and right side kill from Fitzmorris, but Foecke’s eighth kill of the set on the 16th assist of the frame from Hames gave the Huskers the breathing room they needed to even the match at a set apiece. 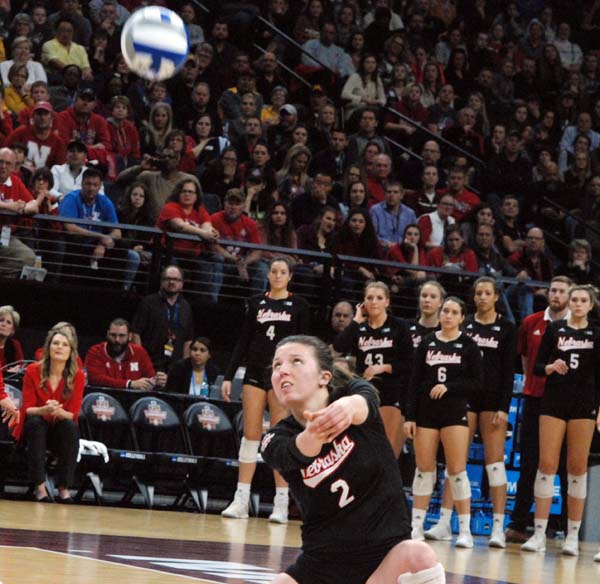 A fast start and a faster middle propelled Stanford to the comfortable 25-16 Game 3 win. The Cardinal surged to a 7-2 lead at the start, as Gray directed a flawless offense that featured two kills each from Plummer and Fitzmorris. A Capri Davis kill – she was very effective in limited court time — helped Nebraska get within 10-8, but Stanford put the set away with a 7-0 run that included a kill and two assisted blocks from Alade. Stanford led by as many as 11 points in the set at 20-9 and nursed it to the finish, capped by a combo block from Alade and Gray to get within one set of the title.

Nebraska responded to the Game 3 thrashing by returning the favor in Game 4, 25-15. With Sun serving, the Cornhuskers used two early kills from Jazz Sweet to steam to a 5-0 lead and never looked back. The game featured breathtaking defense from Maloney, monster kills from Stivrins, Foecke and Sweet and precision setting from Hames. Stanford was never in the set and Plummer had just one kill in it despite taking eight swings. 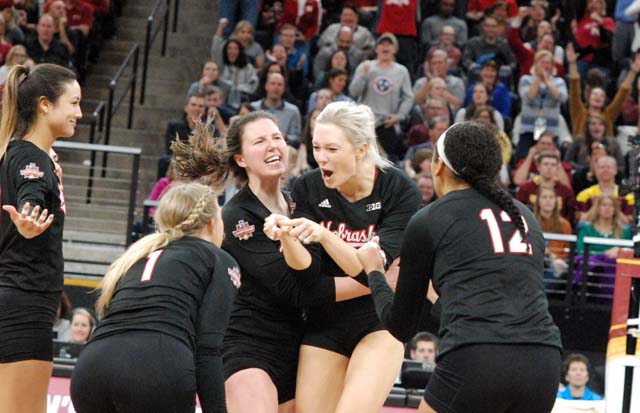 Game 4 was all Nebraska as the emotions ebbed and flowed

“In that fourth set Nebraska came out swinging hard,” said Hentz. “They got us out of system with their serve and we weren’t able to get in rhythm.  Going into the fifth set we said, ‘Hey, we’ve got to lay it all out there, give it everything we have.’ It took us a while to get there. Nebraska kept coming back. They put up an amazing fight.”

All the momentum was with Nebraska as the fifth set got underway. When the Huskers took the first two points, on a kill by Foecke and tandem block by Sweet and Calli Schwarzenbach, it seemed that Nebraska was destined to repeat as champions. If Stanford was going to win its second title in three years, the momentum had to change.

“We had to flip it around,” said Gray.

“We talked about taking it point by point,” said Plummer. “We couldn’t look behind because in a shortened fifth set if you hold on to things it’s not going to end up in your favor. I think we did a really good job of coming out strong.”

“We just fought for each other that last set,” said Gray.

“I think we just all have a lot of respect for that team, how hard they play, the way they defend, the way they scrap,” said Hambly. “We knew we had to match that from the beginning. That was the difference in the sets we won; they won: Who defended, who passed. I’m really proud of our young women for the turnaround after the fourth and staying together because it could have been easy for us to fracture and fall apart.”