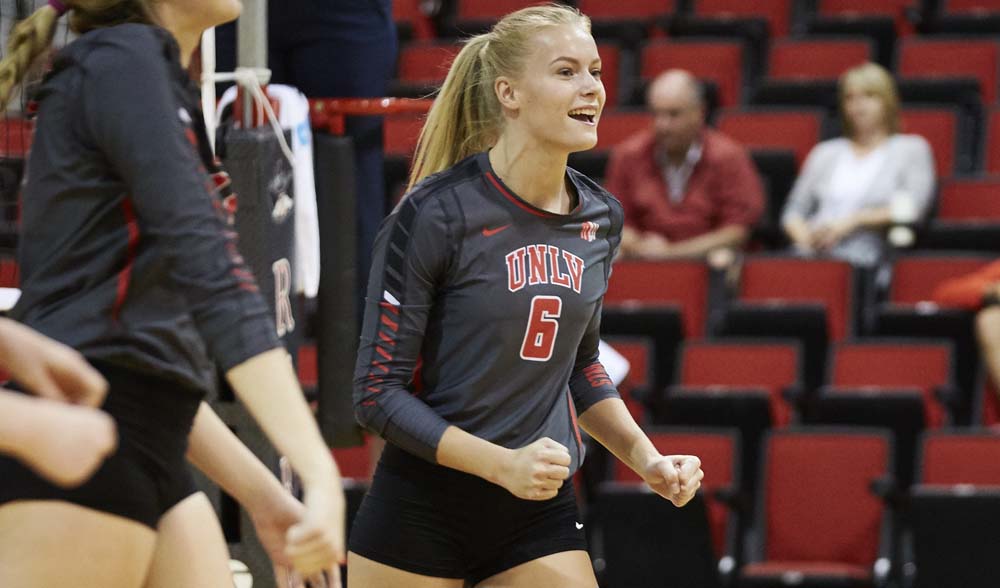 Thea Sweder is not from Sweden. Nor way!

Let’s have a little fun today by discussing college volleyball’s best names. I asked college coaches yesterday and today to clue me in to those players whose names were great all by themselves or lent themselves to great puns.

There wasn’t an Airial Salvo in the bunch. Salvo played outside hitter at two Pac-12 schools between 2005 and 2009 and had a name that befit her talent. For those who don’t know, a “salvo” refers to the discharge of multiple weapons at once. So Airial Salvo (“aerial salvo”) is a GREAT volleyball name for an outside hitter.

Wichita State coach Chris Lamb took exception to my dubbing Salvo as the best volleyball name of all time. Lambo asserted that the honor should go to Rocky Titan, who played back in the day for Cal State Fullerton, whose nickname is the Titans. That’s pretty good!

For mentors, no one tops former Cal boss Rich Feller. Though his name and status suggested he had the funds to fly first class, I know for a fact that he always flew coach!

Okay, with that background in mind, let’s look at some of the names you may hear or read about this year in college volleyball:

UCSB freshman middle Natalie Ballout has perhaps the most versatile volleyball name. When she’s going good, she balls out! When not so good, the ball’s out…:(

Florida Gulf Coast OH/S Snowy Burnam has a great name. As a player she can be both hot and cold! Her teammate, OH Kirsten Garder, has a volleyball name only if she can belt the ball.

The University of Findlay has a right side hitter, Molly Hammersmith, and an outside named Amanda Winner.

Michayla Shanks is an OH for Lyon College. Coach Ray Green reports that she is the team’s best passer! Geneva College has a DS with an unfortunate name, Annalise Shank. I hear she passes well but I could be way off.

Olivia Diggs is a freshman at Lake-Sumter State College. She’s a middle blocker though.

St. Louis University OH Sien Gallop is, appropriately, one of the team’s horses.

Baylor middle Shelly Fanning is pretty consistent, although every now and then there’s a swing and a miss.

Cal middle Lauren Forte is a player to build around.

Iowa State setter Piper Mauck likes to have fun when she’s not making it.

Houston has a player named Kylie Napoleon. It should surprise no one that the DS stands just 5-foot-6.

URI DS Olivia Budinich would be at the top of this list if her name was instead Budgininch. Dare to dream, Olivia, dare to dream! Her teammate is freshman RS Zoe Staats. I worry she might not be a team player.

Albany DS Anna Chalupa would make an impact if she tried harder, but she’s always fried!

There is a freshman OH named Storm Bookhard. She attends Bard College, which I suppose is poetic justice.

Lindenwood University has a libero named Sara Wagenknecht. It’s pronounced “wagon connect” and would only be funny if she had a hitch in her platform.

North Alabama DS/S Libby Jump has a great name made even better by the fact that she’s majoring in Exercise Science!

That’s all I have time for today. If you know of a great college volleyball name, email me, john@prepvolleyball.com, and I’ll be sure to include it in a future report.