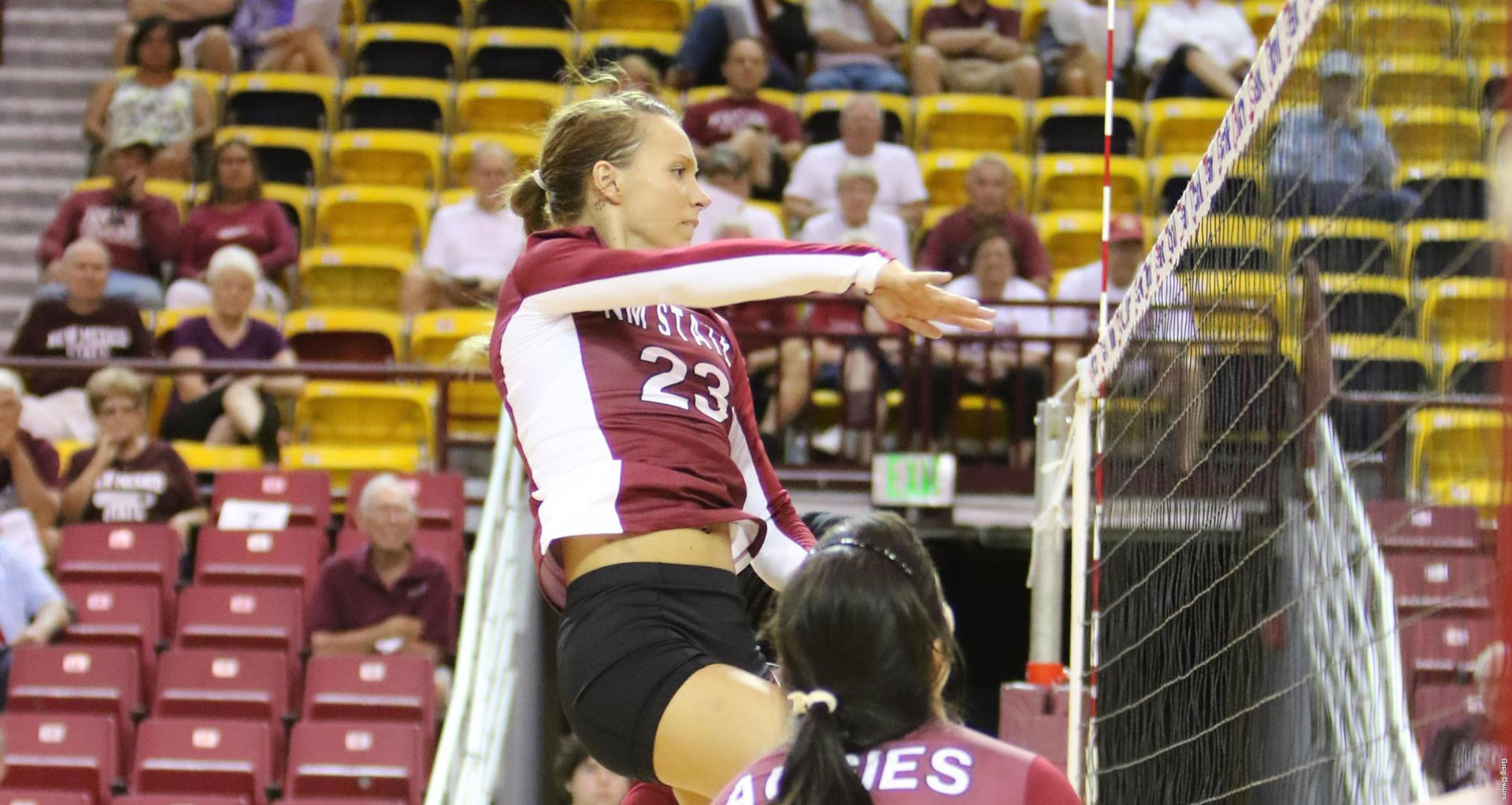 Micaela Spann and Kierra Holst rose for the block, delivering the stuff and with it a collective sigh of relief.

Going the distance hasn’t favored the Sooners, losers of their previous three matches to reach five sets – against San Diego, Colorado and North Texas – until breaking through against the Aggies.

The fertility streak was close to continuing when New Mexico State climbed in front 9-7 in Game 5. Oklahoma held firm, using back-to-back kills from Marion Hazelwood and Kimmy Gardiner to go up 10-9. After Nathali Castellanos’ right-side kill pulled the Aggies to within 12-11, Hazelwood took Audrey Alford’s slide set and ripped it cross court to push the Sooners ahead 13-11.

Castellanos scored once more to even the score at 13. Alyssa Enneking answered off the block and Oklahoma held match point at 14-13. Gwen Murphy connected to keep New Mexico State alive and make it 14 all.

Oklahoma gained another match point when Spann put one down from the right before teaming up with Holst for the clinching block a point later.

1. Learning to share. After running a 5-1 with Julia Doyle during the opening weekend, the Sooners have ran a 6-2 since, with Alford joining the mix. The distribution among the hitters was balanced against the Aggies. The strongest offensive outing came from Spann, who recorded 12 kills on 22 attempts and hitting .545.

There was plenty to like from it, but the Sooners have done a fairly good job of moving the ball around this season. It’s been more about executing and that took place against New Mexico State. Oklahoma finished hitting .341 as a team, with 16 hitting errors in five sets.

It would have been a shame to waste an effort like that. And losing another five-setter after leading 2-0 would’ve stung twice as bad. As it stands, Oklahoma doesn’t have to worry about that and maybe a victory like this is the spark it needs to get moving in the right direction.

2. What if game. Any time a team is leading like that in the fifth set and loses, that’s the situation it’s left in. “I’m disappointed we lost, I knew it would be a close match,” New Mexico State coach Mike Jordan said. “In the fifth set we just made a couple of mental mistakes and a couple of missed assignments. We dominated them for two sets, the third and fourth, and you can take a lot away from that. The key is to put it together for three sets, not two. But we will get there.”

Up 9-7, New Mexico State allowed Gardiner to score off the block too easily, then was stuffed trying to hit too low cross court and it was 9 all.

The Aggies also had a swing to go up 11-10 after libero Andrea Tauai got a ball up, but hit long and the Sooners were in front 11-10 instead. A bad pass led to an ace on the next point and the Aggies trailed 12-10.

New Mexico State showed its fight by pulling even at 14, but Oklahoma went to the slide once more, something the Aggies had trouble defending.

3. What’s next. New Mexico State bounced back to sweep Robert Morris, 25-16, 25-11, 25-15, earlier Friday. Murphy continued her strong play by posting a team-high 14 kills. The Aggies wrap their weekend by playing Brown and Denver. The challenges will keep coming for New Mexico State next weekend. It faces No. 15 Arizona and No. 4 Texas before starting conference play.

Oklahoma plays Denver later before facing UTEP on Saturday. Beating New Mexico State could prove big for the Sooners, especially with what’s looming next weekend. The schedule ramps up with a pair of Pac-12 opponents in No. 7 USC and No. 8 Washington.