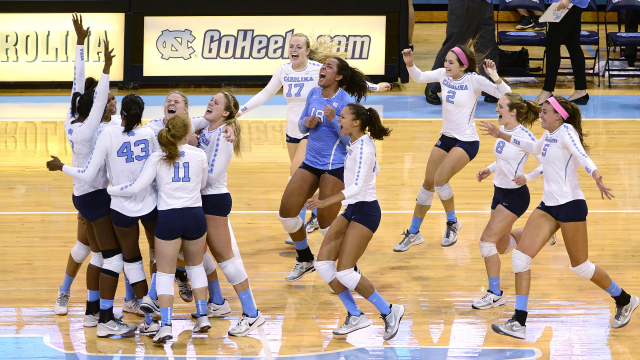 2. A disturbing trend. That’s the question right now surrounding Stanford, which allowed North Carolina to hit .300. It’s one thing for Penn State with its lineup of hitters to go for .327 at home. However, I don’t know of anyone making an equal comparison of North Carolina’s attack to Penn State’s. Look at it this way, North Carolina hit .121 in losing to USC, .096 in falling to BYU, .109 in going down to Wisconsin and .176 against Minnesota. That’s an average of .126.

North Carolina just didn’t have a good night offensively against Stanford, it had a tremendous outing compared to its average against other ranked opponents.

“Our offense came alive tonight,” North Carolina coach Joe Sagula said. “When we played the Italian team on Monday, our offense really picked up, and I think that’s what happened. The rhythm, our flow, our passing, our setting and the swings we took were so much better being at home than it had been on the road.”

No doubt North Carolina is going to feel much more comfortable at home, but does it explain it all? Or does some of it have to do with Stanford’s inability to slow down the opponent?

Last weekend, Aiyana Whitney finished with 13 kills and hit .440 from the right side for Penn State. Treacy and Fricano are not Whitney, yet right-side attackers have gone for 28 kills on 60 swings and hit .417.

Along the same lines, Haleigh Washington burnt Stanford for 12 kills and hit .526. Neuenfeldt and McPherson aren’t on the same level of Washington, but still combined for 14 kills on 23 swings and hit .478.

3. What now. Offensively, the numbers out of the middle were on the upswing for Stanford. Ivana Vanjak finished with eight kills and hit .429, while Merete Lutz had nine kills and hit .333. Together, they combined for 37 swings. That’s more along the lines of the balance Stanford needs, but that was about it for the Cardinal against UNC.

Brittany Howard was solid but not spectacular like needed with the absence of Burgess. Howard had a team-high 13 kills and hit .237. However, after a terrific performance against Penn State, freshman Hayley Hodson struggled against the Tar Heels, hitting -.087 with five kills. Sidney Brown, filling in on the right with Hodson moving to the left, hit .062 with five kills as well.

From what we saw against North Carolina, none of it might matter for Stanford unless Burgess is in the lineup. She tightens up the passing and the defense, not to mention is another arm the team needs. If she returns soon, it’s likely Stanford gets back on track and we look back at this loss knowing it happened without her. But if Burgess misses a significant amount of time, it’s looking like Stanford won’t be able to absorb the loss of its two best players.

As for North Carolina, this has to be the victory that gets the team feeling better about itself. Going 0-4 against USC, BYU, Minnesota and Wisconsin is far from terrible. Many programs would go 0-4 against the same four teams.

Still, losing can take its toll on the psyche and taking down Stanford, Burgess or not, is a boost the Tar Heels can use.

“The intangibles (the win) does is huge for our team,” Neuenfeldt said. “It gives a lot of players a lot of confidence. Tati’s new at libero right now and I think she played phenomenal. So I think that little bit of confidence is great for her. Taylor Leath played awesome. She got some great swings in. It’s just the little things.

“But we’ve got to keep pressing. We’re not satisfied. This is a great game, but we’re not done yet.”

It was a great victory, one North Carolina will aim to build on with the blueprint laid forth.

If the Tar Heels can serve, pass and defend like they did against Stanford, North Carolina is going to be competitive with anybody it faces. The way it played Thursday showed North Carolina can overcome not having the same left-side terminators as other teams.

Passing well allows North Carolina to get its middles and right sides going and they showed what they can do Thursday in upsetting Stanford. But most importantly, the Tar Heels need the same defensive intensity and attitude the rest of the way to reach their potential.

They showed just how much they can control a match from that end of the floor.