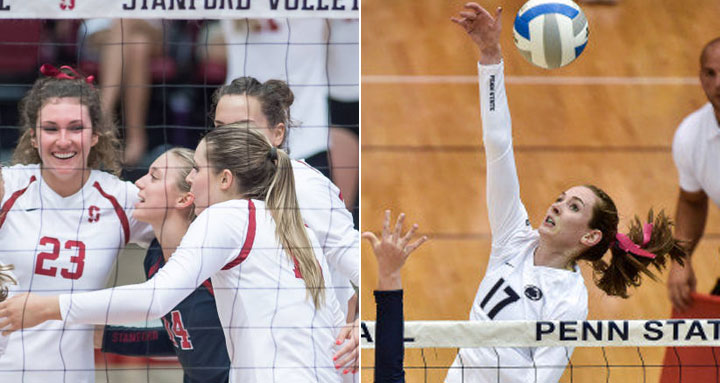 The calendar has barely made its way into September, so why are we already talking about tricks or treats?

It’s the perfect description of the upcoming weekend.

Make no mistake about it, Friday and Saturday could be the best two days of the regular season.

Top-ranked Penn State hosts No. 2 Stanford, which also plays No. 6 Illinois. On top of that, No. 3 Florida squares off with No. 4 Texas, which also faces No. 5 Nebraska. Meanwhile, No. 8 Oregon faces Florida and Nebraska.

What a treat for volleyball fans everywhere.

“It’s a good challenge for us,” Illinois coach Kevin Hambly said. “Stanford is No. 2 in the country. We’ll see how the young kids respond against a team of that caliber. They have tons of talent. Colorado is a Top 25 team as well. Both will be great tests and as we move forward we’ll get to see how the kids respond on the road.”

It doesn’t get any better, but beware.

Behind every treat there’s a trick lurking.

The most dangerous include rush to judgment, over-reacting and utter despair.

See, it’s going to be all fun and games until the loss hits. Then, fans go for one or all three of the above.

We are here to tell you don’t get tricked!

Feel free to write in and petition on my behalf for a much-deserving raise because I’m about to dish out the kind of perspective many would gladly pay a professional in order to sit on their couch and be told the same thing.

It’s all a matter of perspective and we all have a Master’s Degree in it here at PrepVolleyball.com.

Playing well or not at this point in the season doesn’t have a bearing on winning the national championship. Texas took home the title in 2012 despite losing back-to-back matches to Penn State and Minnesota.

Imagine the horror of that and think about what Nebraska fans will be like if the Cornhuskers drop a pair this weekend? A couple weeks later during that season, the Longhorns also lost to Illinois.

The audacity of Texas to think it’s OK to lose in September and finish on top in December, I know.

That’s the message that’s being delivered here. Sometimes it’s alright to lose because not all is lost, so to speak.

“It’s a test to see where we are and how we handle the situation,” said Texas coach Jerritt Elliott of the upcoming matches with Florida and Nebraska. “All the teams are going to learn what we are about, but there have been years when we have struggled at this point of the year, 2012 is a prime example and we went on to win the national championship.”

Try remembering this over the weekend.

It may come in handy in preventing a full-blown meltdown.

At the same time, we must caution of the opposite reaction.

Need we point to more than Stanford knocking off Penn State last season only to go on to watch the Nittany Lions lift the trophy when it mattered most?

We didn’t think so.

As for what’s ahead this weekend, here’s hoping the predictions go better this time. Last weekend, it was an average outing, going 11-11 overall.

No. 2 Stanford v No. 6 Illinois – Stanford is the No. 1 team in our Composite Poll and should be getting the services of Merete Lutz back for its big weekend. Stanford had no problems defeating Minnesota and Texas A&M with a pin-heavy attack last weekend. We are about to see if Lutz’s return can help bring more balance and if not will the pin-heavy approach work against the tougher teams. This is also a meeting between two of the top freshman in the nation in Stanford’s Hayley Hodson and Illinois Jordyn Poulter. The pair were on the Junior National Team together and are good friends. If Illinois pulls off the upset, expect Poulter to play a huge role as she’s taken on the starting setting duties. Hodson has the supporting senior cast around her and can ease in a bit more than Poulter can. We are big on experience, so the pick is Stanford in 4.

No. 3 Florida v No. 8 Oregon – Were the Ducks already looking ahead to Florida when they needed five games to defeat George Washington earlier in the week? Either way, Oregon is going to need a much more consistent showing to have any hopes of upsetting the Gators. Florida is further along, with more returning pieces and more experience. The issue for Oregon is how does is slow down Alex Holston and contain Rhamat Alhassan? Oregon has been getting tremendous production from freshman outside Lindsey Vander Weide. She leads the team with 50 kills and is hitting .284. However, she’ll be facing a strong blocking team in Florida, so it’ll be a difficult match up for the rookie. Florida in 3.

No. 5 Nebraska at No. 4 Texas – Is this the weekend we see the debut of Ebony Nwanebu take the floor for the Longhorns? She didn’t play during the opening weekend and questions remain if she’ll play this weekend or not. Elliott was non-committal about anything during his weekly press conference.

“We’ll see what our health is like,” he said. “We feel good about the lineup right now. We are getting good production out of people and we saw some consistency.”

Her presence or not is going to make a difference one way or the other. In her absence during the opening weekend, Texas shifted senior Molly McCage to the right side and inserted freshman Morgan Johnson into the middle with Chiaka Ogbogu, running a 5-1 with Chloe Collins. If Nwanebu is back in the lineup, Texas could shift to a 6-2 and get both her and McCage in the front row. Her presence would add to the Longhorns’ blocking in hopes of slowing down Kadie Rolfzen.

Another key could be how well Nebraska adjusts its defense at the net from the opening weekend.

“I thought we did everything well except blocking, which surprised me because I thought blocking was our best skill,” Nebraska coach John Cook said.