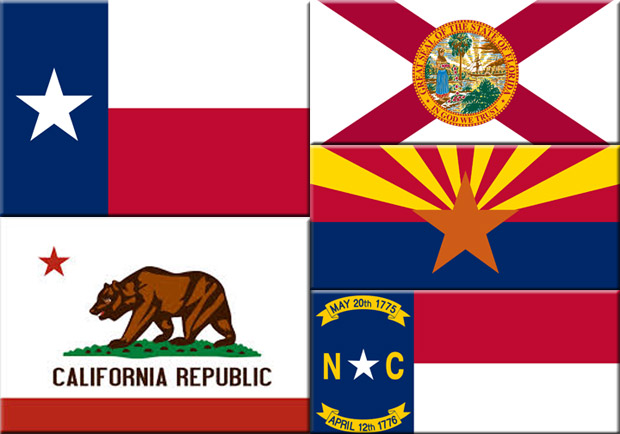 Have you ever wondered what states play the best volleyball?

At PrepVolleyball.com, we set out to rank the states individually, 1-50, to help answer that question.

It’s important to note the state rankings were done with one intention – to have fun.

There was some research done for conversation sakes, but this wasn’t a scientific process with mathematical formulas and averages and projections to it. Also, it's not done from a historical perspective, but rather the past three years.

It is filled with subjectivity, as there were plenty things that were out there to be considered. Some were factored in, others weren’t.

California and Texas are the largest states, so it would stand to reason they would have the highest numbers in terms of teams ranked nationally and medals compiled at AAUs and Junior Nationals. We didn’t factor in their totals relative to population.

States like Indiana, Kentucky and Ohio are much smaller in population and thus might produce teams being nationally ranked at a higher rate per its population. We didn’t delve that far into it to find out. Obviously, using a factor like this could change the rankings.

However, this is not that and instead focuses on the past three-year period, with emphasis on the high school and club seasons. College might be used to determine a tie, but many colleges rely on players from out of state so it’s not the best gauge.

That’s another thing that wasn’t taken into account. Some players live in one state but actually play for a club in another state being so close to the border.

Another thing we did was add up the number of medals won by each state the past three seasons between AAUs and JNs. To get a broader sense, we used age groups 12s-18s and counted all but the Patriot and Classic divisions.

Lastly, we added up the number of Senior Aces from each state over the past three years to give us a grand total between the four areas.

This served to give us a good understanding of what the last three years have looked like state-by-state. There’s a good chance that if your state is getting lots of teams ranked in high school and club, is winning medals and has plenty of Senior Aces then it’s a volleyball power.

What it doesn’t take into consideration though is things like national championships and where the teams were ranked. We wanted this to be fun and have some subjectivity to it.

If we wanted to do it by the numbers, we could’ve produced an average ranking for high school and club seasons for each state and divvied up the type of medals won between gold, silver and bronze and gone strictly by the numbers.

Something else to keep in mind is our criteria centers more around success with teams getting ranked and states winning medal than it does with passion and culture and fan bases. States like Hawaii and Nebraska produce big attendance numbers when it comes to college volleyball.

With the four categories we mostly based our rankings on, there were nine states that didn’t have a mark in any one of them. These are going to be the teams listed in the 40s and in some ways are in the same boat.

After that, we used the cumulative totals as a guideline for our rankings. Again, we didn’t go exactly by the numbers but they did a good job of revealing which states have been the most successful the past three seasons by our parameters.

We start with 41-50 today and will work our way toward the Top 10 by releasing 10 states a day thru Tuesday.