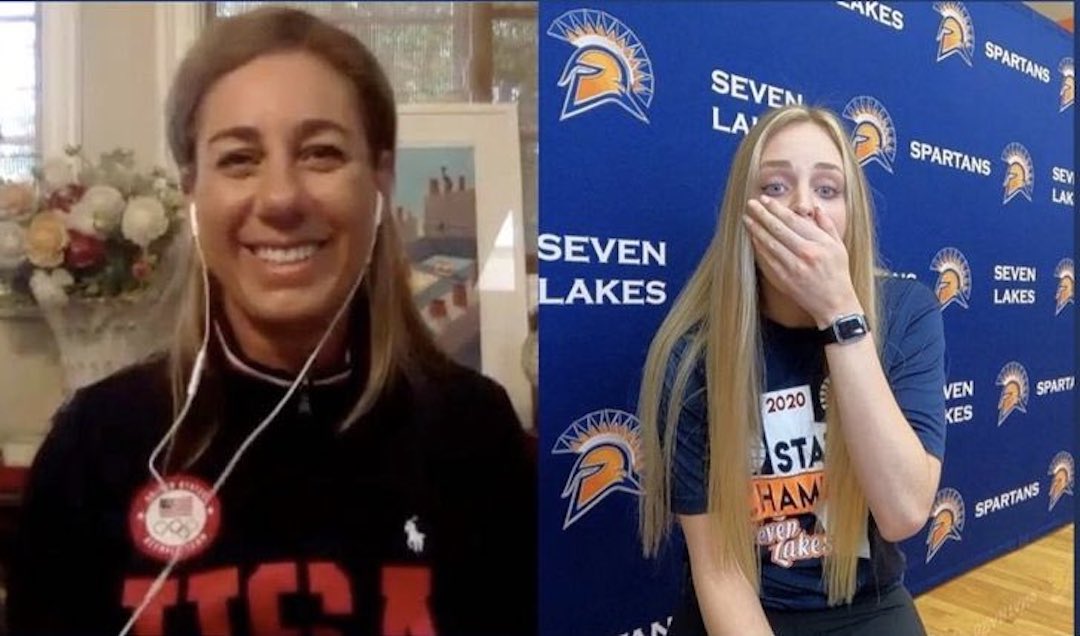 “I know Ally will go on to do great things. This award is validation to all the hard work you’ve put in on the court and the classroom.”

Two weeks ago, Gatorade recognized each state’s most elite high school athletes with Gatorade Player of the Year awards and a banner to display at school.  The Gatorade Player of the Year award recognizes student-athletes for athletic achievement, academic excellence, and personal merits outside of the gym or classroom.  Of the 607 athletes honored every year, only one national winner is selected for each of the twelve sports.

Batenhorst admits to “freaking out inside” when Ross popped up on the screen.

“Then April said, ‘You’re not only a state [recipient], but you’re also the National Player of the Year’ and my whole family walked in with a trophy,” recalled Batenhorst, still giddy about the honor.  “I was just like, oh my gosh, shaking. I started crying a little bit, and it was an unreal feeling. It’s insane.”

Batenhorst beat out nearly half a million volleyball players nationwide and topped the list of state winners, including 37 with signed letters of intent at Division 1 schools, 30 with a GPA of 4.0 and above, and six returning state Gatorade Players of the Year.

With 574 kills, 371 digs, 33 blocks, and 32 service aces, the Nebraska commit led the Spartans to a 25-1 record and the Class 6A state championship this past season, where she was crowned MVP of the tournament.

“This one is really special, because it not only considers volleyball but also your academic accomplishments and your character,” the 6-foot-4 senior outside hitter said. “It’s about more than just volleyball.”

On top of incredible success on the court, Batenhorst maintained a 4.11 GPA throughout high school, participated in hurricane relief efforts, and volunteered at the Ballard House through her church.  Her bubbly personality could light up a room, which she looks forward to doing at the University of Nebraska.

“The atmosphere and tradition at Nebraska is something I’ve always wanted to be a part of,” Batenhorst said. “I just want to be the best player I can be and bring energy on the court, be positive, uplift the team, make an impact.”

Originally born in Omaha, Nebraska to University of Nebraska alums, she’s been a Husker for long before she signed her letter of intent.  When she started the recruiting process, she knew the coaching staff could take her to the next level and she played with a lot of her future Husker teammates on the USA Team. The stacked class includes five of the top 16, four of the top 10 and all of the top three recruits. Batenhorst looks forward to building even stronger relationships with them when they report to campus in the coming weeks.

Batenhorst joins an impressive group of former Players of the Year who have combined for 13 National Championships and 92 Gold Medals. She hopes to follow in some of their footsteps in the future.

“That’s my goal. I really want to play [professionally] after college, go as far as I can, and be a part of USA Volleyball again. Definitely a goal of mine.”

Her advice for younger athletes looking to follow in her own successful footsteps? Make relationships with your teammates, coaches, and teachers. Pay attention in class. Work hard. Take every day as an opportunity to get better.  This answer sounded incredibly familiar as I had just gotten off a Zoom call with two-time Olympic medalist and seven-time USA Volleyball Beach Player of the Year April Ross.

Looking back on her career, Ross attributes her success to connecting with teammates, enjoying the journey, and being process-oriented.  She emphasized the importance of shooting for outcomes you want, but ultimately it’s more about the day-to-day routines and putting in the hard work.  I see a pattern.

“It’s so fun for me to come back and present these awards,” said Ross. “Ally was genuinely shocked and appreciative, and that speaks to who she is as a person.  She wasn’t expecting this even though she’s such a great player.”

Being recognized as the Gatorade National Volleyball Player of the Year opens the door to lifelong opportunities.  Ross likes to tell GPOY recipients “they’re part of the Gatorade family for life and they can make it as much as they want to make it.”

“I know Ally will go on to do great things. This award is validation to all the hard work you’ve put in on the court and the classroom; hopefully it encourages her to keep that mindset.”

Between awarding GPOY’s and prepping for the 2021 Tokyo Olympics, Ross is driven to make an impact beyond the sand.  She believes once you have a significant platform, you have an obligation to use it for good and often asks herself, how do I promote causes that are going to better people’s lives?

“I’ve seen what’s possible through [Gatorade] and it’s really motivated me,” she said. “As my career has gone on, I was so focused on making it work as a career and now that I feel established and in a good spot, it’s more about how I can help the younger generations find success as well.”

Earlier this month, Ross was featured on the “Heart of a Champion” series by Classroom Champions to discuss the power of community and is a huge advocate for the sport of volleyball through all of her socials.

It’s no surprise she was recently selected to be a part of Gatorade’s Women’s Advisory Board to help drive continuous change for women and girls in sports.

“Something I’ve felt strongly about as my career has gone on is women involved in the administration process,” Ross elaborated on some ideas for the board. “In the coaching and training roles, women can relate a little more to [female adolescents] playing sports and the pressure surrounding it.”

The board will aim to keep more girls in the game by addressing the societal and cultural barriers that contribute to the attrition of females in sport (The Gatorade Company).

Going into the Olympics, Ross knows social platforms are a crucial part of owning your role as a professional athlete.  She feels honored to have the following she does and wants to do good with it.

With a 159k following on Instagram, Ross’s tagline reads: I’m just out here doing the best I can with what I’ve been given.

To learn more about the Gatorade Player of the Year program, check out past winners, or to nominate student-athletes, visit playeroftheyear.gatorade.com or on Facebook at facebook.com/GatoradePOY