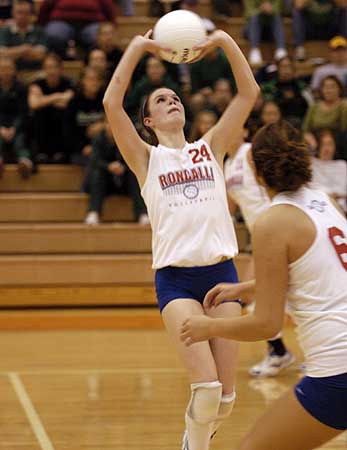 The two starting middles had never played varsity before 2006. One outside hitter and the team’s right side attacker had never started a varsity match. But the Roncalli Rebels had 5-11 Paige Weber, a senior setter whose experience, determination and will made everything else irrelevant, even as her team was down two games to none in the Indiana Class 3A state final.

Roncalli rallied to win state over Mishawaka Marian, closing the season on a 23-match winning streak. Weber, who played the last three-plus games on a sprained ankle, finished the match with 40 assists, 11 kills against just one error, 15 digs, five aces and eight blocks as the Rebels became the first team in state history to win a title match after dropping the first two games. After the match, Marian coach Dan Anderson said, “I can’t wait to play them next year. Surely they don’t have two like Paige.”

For this and so much more, Weber is the 2006 Andi Collins Award winner as the nation’s best senior setter.