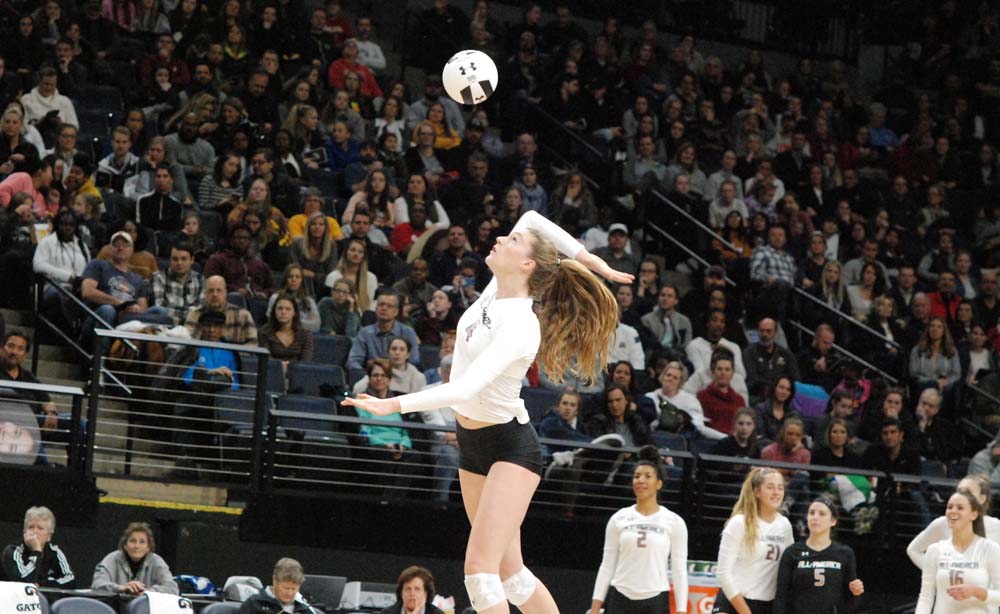 I have seen the future of NCAA Division I volleyball and her name is Kendall Kipp.

Last night, before a good-sized crowd at the 11th Annual Under Armour All-America Match in Minneapolis, the 6-4 outside hitter, playing in an exhibition featuring 24 of the finest high school seniors in the country, was the best player on the court by far in leading Team West to an easy 3-0 win over Team East. The Team West MVP showed a deft passing touch in the back row, supplied a massive block on the left side and scored with ease whether hitting left or right or crunching an attack out of the back row.

I have been to five of these matches in my lifetime. Last night was the first time I ever witnessed domination like that. In a match designed to showcase peers before they make their way to the next level, Kipp quite simply had no peer.

Kipp is one of three players in the match headed to Stanford, which will play for the title tonight. Stanford graduates only middle blocker Tami Alade among its top nine players, but it was apparent to all who witnessed Kipp’s majesty at the Target Center that Cardinal coach Kevin Hambly will have to find room for her next year. After all, she is Kathryn Plummer, the two-time reigning AVCA National Player of the Year, just two inches shorter.

“They have so many great players there,” Kipp noted. “I’m just going to give it my all in practice and keep working to get better as an all-around volleyball player. I’m ready to go in and work hard and play whatever role they need for me, whether it’s as a good teammate on the bench or out on the court.”

Madi Kubik, a 6-2 outside hitter, was named MVP for Team East. Kubik showed a mature all-around game and an innate knack for scoring from the left side. The native Iowan is headed to the other NCAA finalist, Nebraska, next year, and could see immediate time on the left with the graduation of All-America Mikaela Foecke, another Iowan. 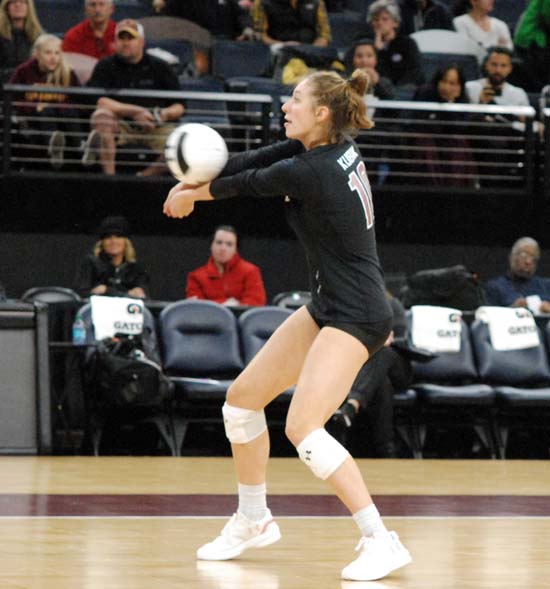 “We were just talking about that, that our teams are playing in the championship,” said Kipp. “We were saying hopefully that will happen for four years while we’re there.”

Kipp and Kubik were hardly the only players to stand out last night despite the match not being very competitive. For starters, all four defensive players – Georgia Murphy and Kamaile Hiapo for Team West and Anna MacDonald and Kenzie Knuckles for Team East – were exceptional. For one match, I liked MacDonald the best, followed by Hiapo, Murphy and Knuckles.

MacDonald is the little sister of a former D-I libero and she has learned well. The Atlanta native, who is following in her sister’s footsteps to Wisconsin, moves instinctively on the floor and passes with tremendous confidence. She will help Wisconsin eventually, though she will have to claw for time early in Madison as the entire Badger back court returns. 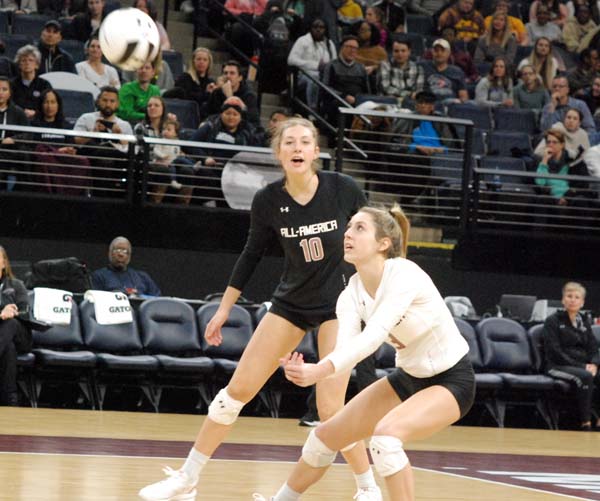 MacDonald passes as Kubik looks on

The Arizona-bound Hiapo, who has great quickness and court sense, is likely to make a more immediate impact collegiately than Murphy, her backrow mate on Team West. Hiapo will join returning libero Makenna Martin next year to give the Wildcats a dynamic duo. Murphy, who has been playing high-level volleyball since eighth grade and makes all the plays, is joining an Oregon back row that is as crowded as it is talented.

Knuckles, who had another outstanding high school campaign as a hitter for Yorktown HS, will join current freshman and former Munciana club mate Megan Miller in the back row at Nebraska. Both are incredible, smaller athletes who could make the Husker defense impenetrable for years to come.

Three other players who stood out for me were RS Caroline Meuth for Team West and OH Temi Thomas and setter Savannah Vach for Team East.

Thomas is an ultra-physical attacker who plays high and hits hard. She is expected to start immediately at Northwestern to help the Wildcats continue their ascension in the rugged Big Ten.

Whether setting or hitting, Vach has always demonstrated a mature skill set. Running a 6-2 last night, the Miami-bound Vach did not get the chance to show off her ability to hit or block but did state her case to be the starting setter for the Canes next year with longtime setter Haley Templeton set to graduate. 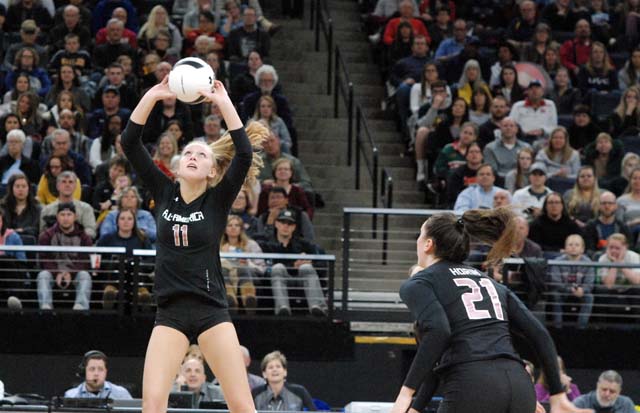 All told, the 24 players in the All-America Match will disperse to 18 universities next year. Some could have immediate impacts on their respective programs. Others might have to wait before leaving their imprimatur. We examine the players we have not mentioned heretofore.

Kara McGhee, who played for Team West and was recognized as the “Heart and Hustle” Award winner, is a middle blocker headed to Baylor. The Bears have their two starting middles back. Shelly Fanning is a star but McGhee could displace the other middle, Jaelyn Jackson, because she has the capability to supply much more offense.

Madison Horin, from Team East, has a game similar to McGhee both on the court and with the “heart and hustle” intangibles. Horin should start immediately at USC opposite big-blocking middle Jasmine Gross and bring her competitive personality to the court.

Besides MacDonald, Wisconsin had two other players in the match, setter Izzy Ashburn and MB Courtney Gorum. Ashburn is a talent and showed the ability to run a high-level team last night, but she will have to wait two years before seeing significant playing time with established star Sydney Hilley in Madison. Gorum is a long athlete with immense potential as a blocker. Tionna Williams has used her eligibility, so there is an opening in the middle, but there are more-experienced players already waiting in the wings. Gorum may need to serve an apprenticeship, but when she’s ready, her presence on the floor will be loud.

Besides Kipp, Stanford had two other pin hitters playing in the match, Caitie Baird and Natalie Berty. Both are six-rotation outsides with advanced skills but coming to a team with a crowd at that position. It may take a while for either to make her mark on the floor. Of course, they will be students at Stanford, which is pretty incredible even if not playing right away… 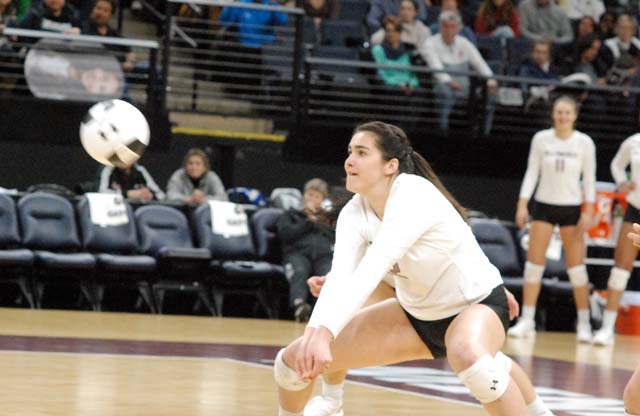 Riley Zuhn also will join Kubik and Knuckles at Nebraska. Zuhn, who stands 6-5, played middle blocker in the match and was excellent, but plays outside hitter on her club team. She is tall and physical in either role and gives John Cook great depth and position flexibility.

Riley James set the Massachusetts state record for career kills in 2018. The 5-10 OH is going to a great spot for her at Bryant University, which graduates its standout hitter, Julia Flynn. James is a jumping jack who will score for the Bulldogs, who made their initial appearance in the NCAA tournament this year, but she will need to work hard on her back row skills to be the six-rotation talent Flynn was.

Cami Nazor has been setting high-level teams for years at KiVA and Louisville Assumption HS, this year’s high school national champions. Nazor is a tall, physical setter and could not show off her complete game setting back row only in a 6-2 last night, but she will make a mark immediately at Duke, which will need her to start right away. Nazor has the experience and temperament to take a talent Duke team to the next level right away. 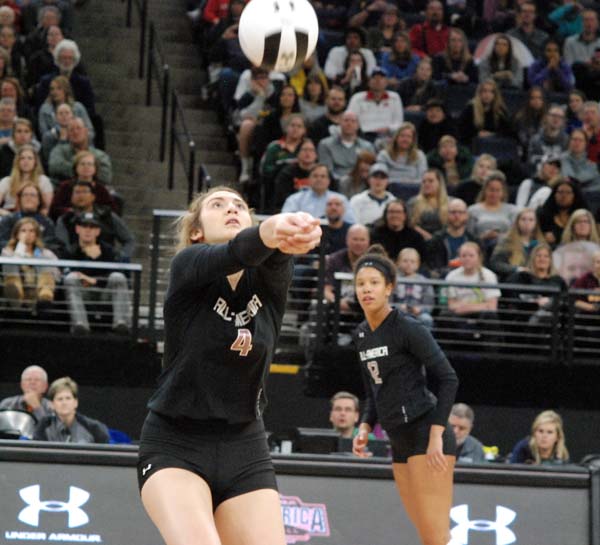 Nazor bump setting with Emma Ellis in the background

Hard-hitting OH Lauren Clark will have a shot to break into Penn State’s lineup early, with the graduation of its two starting outsides. Clark showed the ability to play six rotations last night and her arm is capable of scoring in volume in the Big Ten. The concern here is whether the Minnesota native can play high enough for a full match against the Big Ten monsters the six-footer will have to face on a nightly basis. 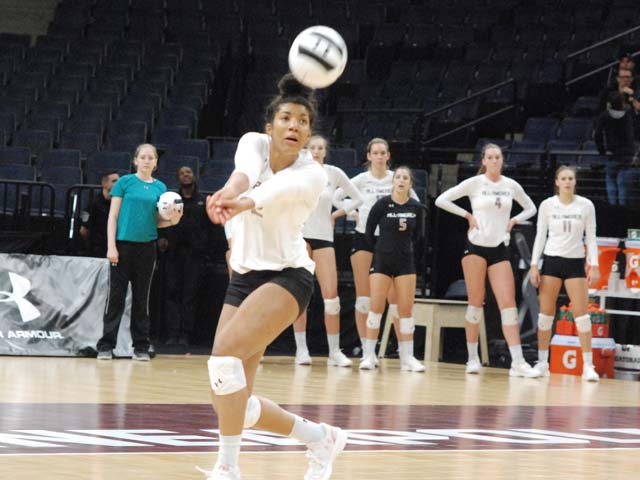 Like Nazor, Emily Fitzner is a setter better suited to using her 6-1 height with a trip across the net, something she could not do last night. Fitzner is going to a young Indiana team that ran a 6-2 with young setters this past season. Fitzner could beat out one or perhaps find time early hitting on the right, which she is very good at.

OH Emma Ellis had some good moments attacking last night for Team East. Ellis is bound for Purdue, a team that needs attacking prowess on the left side. That is what this athletic striker does. And since the Boilers have a plethora of defensive dandies, Ellis probably won’t have to do more than crank.

Madi Whitmire had a great run as starting setter for Prosper HS in the Dallas area. She is headed to UConn, which graduated its primary setter. Tall Courtney Morris is waiting in the wings for the Huskies, but Whitmire’s savvy will need to play, even if only for three rotations at setter or even as a serving specialist.

OH Gabby Gonzales was PrepVolleyball.com’s National Junior of the Year in 2017 and is a leading candidate for the Gatorade honor in 2018. She is headed to Ohio State, which struggled with injuries this past season but has talented hitters in the fold. Still, Gonzales is tall, plays six rotations and has myriad ways to score. She will see the court early and find success with her big arm and big-match experience.

Last but certainly not least is 6-4 MB/RS Shea Rubright, who won a Washington 4A state title this year as the star for West Valley HS. Rubright will enroll early at Minnesota to join a Golden Gopher squad that graduates only one starter, All-America setter Samantha Seliger-Swenson.  Rubright is long and has vast potential, but will likely not impact immediately on a team that has two All-American sophomores, Regan Pittman and Stephanie Samedy, in the positions she plays.

Despite Team West blowing out Team East, there were smiles on both sides after the players took their final bows as high school standouts.

“It was such a surreal feeling to be able to play on the same court as the girls in the NCAA tournament and to play with all the best players around the country my age,” said Kipp. “Everyone was working so hard and having so much fun. It was such an insane experience.”