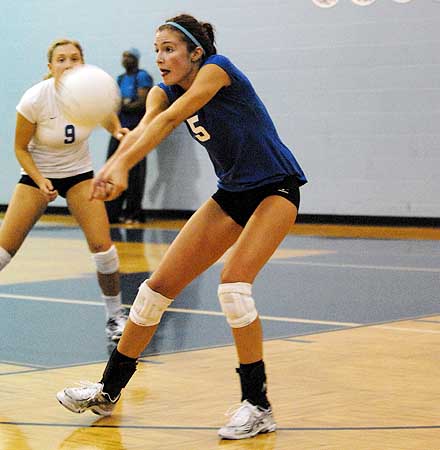 Missy Harpenau was about to play on the biggest stage of her high school life, the rubber match with league power Mount Notre Dame for the Ohio Division I title. The coin toss concluded, captain Harpenau ran back to her teammates and into the pre-game jump around. She come out gushing…blood.

Another player’s tooth had cut her nose. In tears, Harp ran to the trainer, who had trouble stopping the bleeding. Harpenau eventually recovered and powered Cincinnati Mother of Mercy to the championship, delivering 27 kills, 26 digs and four blocks in the five-set win, capping a season in which the Bobcats won 28 times in 29 starts and finished with a top five national ranking.

“We did ask her to stop the bleeding a lot and inflict some on the other team as well,” said Mercy coach Denise Harvey.

Because Harpenau was able to stop the bleeding, both before the title tilt and all season long, she is PrepVolleyball.com’s 2007 Schelde National Player of the Year.