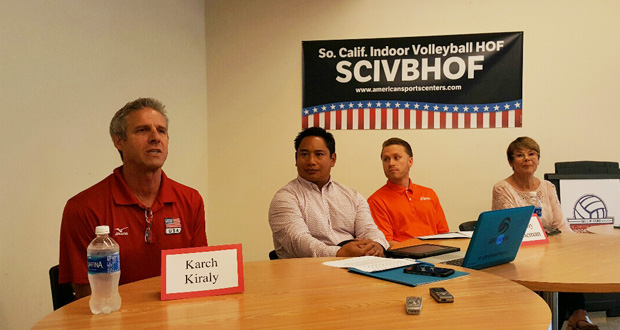 The American Sports Centers will be the place for So Cal volleyball history after it was announced the facility will be the site of a new indoor Hall of Fame. Players, fans and the rest who visit the American Sports Centers in Anaheim will soon have new scenery and a history lesson available while grabbing a bite to eat.

The ASC – the main site of SCVA regional play during club season – announced Wednesday, in conjunction with the City of Anaheim and the SCVA, plans for a new Southern California Indoor Volleyball Hall of Fame.

The press conference was held in the Sidelines Cafe, which is located inside the facility.

Only a few feet away from the walls that will soon adorn some of the greatest names in So Cal history was Women’s National Coach Karch Kiraly, who is among the 42 nominees up for induction and seems like a shoe-in to be chosen.

“There is great tradition of elite volleyball in So Cal and this is a great way to honor that tradition,” Kiraly said.

A committee made up of people with long-time ties to the So Cal volleyball scene originally narrowed a list of 100 names down to the 42 finalists. From there, the committed will select the 25 inaugural members of the So Cal Hall of Fame. The announcement of the 25 former players is set for February, with an induction ceremony scheduled in May in Anaheim.

Rob Espero, a recognizable voice to So Cal fans who announces local high school and college matches, was the emcee of the event. Also included in the conference was the City of Anaheim Sports Event Manager Anthony Brenneman and SCVA Director Ann Davenport, who is also among the 42 nominees.

Mike Gallups, the President of the ASC, said that after inducting the initial 25 members in May the plan is “to add 10 a year for the next few years.” When approached with the idea of having ASC be the site of the Hall of Fame, Gallups said he was all ears.

“Having an indoor Hall of Fame to honor the top volleyball players from the Southern California area is something that is long overdue and American Sports Centers is proud to be the host site,” he said. “ASC is a natural site because the USA National teams have been training here.”