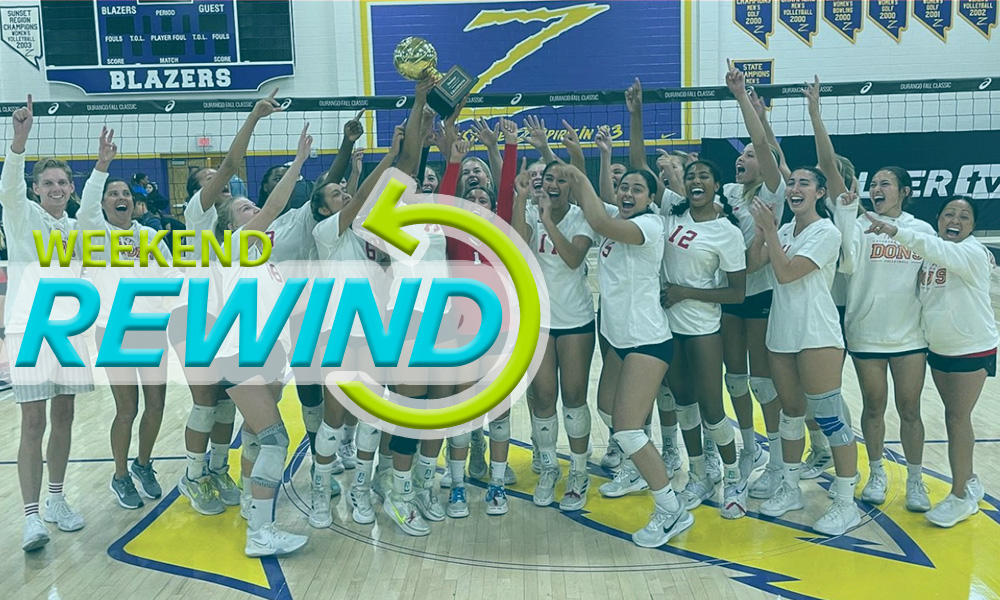 It’s time for the Weekend Rewind, a look at some of the top results from around the country!

Cathedral Catholic (CA) Dominates At Durango Fall Classic
Arguably one of the biggest and the best tournaments across the nation at the high school level, The Durango Fall Classic never ceases to disappoint. Year after year, the top teams in the United States clash for two days, to test their might and show just how good they can be playing cross-country competition. This year, the nation’s No. 1 team, Cathedral Catholic, continued its dominant run of the 2022 campaign, going undefeated in the desert of Durango and claiming the crown of DFC champs. You can check out the action and the stars from Durango brought to you by our very own Sam Haimann right here. We’ll also have some extended coverage and articles as well as an All-Tournament team selection throughout the week as we look back at all the action.

But, let’s take a look at just a few of the marquee matchups Durango had to offer, beginning with the champs themselves, Cathedral Catholic. The Dons dominated pool-play sweeping Arizona’s Xavier College Prep, as well as Co-Californians Branson and Nevada’s own Rancho High. The Dons did it all without conceding more than 16 points in a set! At the same time, fellow Golden State cohort Marymount were busy battling opponents in its respective pool, to earn a place in the championship bracket. This would set up a Cali on Cali final, after Marymount defeated two top 30 teams in Kentucky’s Assumption (No. 3) and No. 23 Fayetteville of Arkansas. At the same time, Cathedral Catholic busted out the broom to sweep Hawaii’s Punahou and ‘Iolani to solidify a place in the finals. The Dons then felt with Marymount in two tough sets, a battle filled with top-level talent that earned both teams a combined seven spots on Durango’s All-Tournament Team. For Cathedral, Michigan commit Jenna Hanes earned MVP honors, while teammates Julia Blyashov (Stanford), Mia Compas, and Milan Bayless (Colgate) also earned ATT honors. Marymount’s outstanding outsides Torrey Stafford (Pittsburgh and Kate Martin, and libero Lexi Trapani (Santa Clara), also took home awards.

Down in Tampa, Florida, At the 30th Annual Berkeley Premier Tournament, hosted by Berkeley Prep, Virginia’s Flint Hill flashed past the competition, sweeping all five opponents to win the championship. In the final, the Huskies hustled Florida’s very own Hagerty to hoist the hardware. It’s been a solid start for Flint, who finished last season with 32 wins and one lone loss. Junior middle Ryla Jones was a beast, utilizing all 6-4 of her frame to dominate at the center of the net. Paired with outside hitter and senior Sydney Bryant (Maryland), with setter Natalie Nguyen dishing the rock, it was a recipe for success, and the Huskies ate it up.

Mauldin Mauls At the Dorman Tournament of Champions

The Mauldin Mavericks (SC) stood atop the competition as the dust settled at the Dorman Volleyball Tournament of Champions over the weekend in Roebuck. The Mavs notched six wins out of eight matches, including the championship match against Nation Ford, which ended in a sweeping narrow victory 25-18, 25-23. In the final, senior Jurnee Robinson (LSU) notched a team high seven kills for the match, while senior setter Sydney Shearer notched a baker’s dozen assists. Both earned places on the All-Tournament team.

Despite being short-handed, Michigan’s Notre Dame Prep took home the hardware for the first time this season, as the Irish finished at 4-0-1 at the Inlay City Tournament. A rock-solid performance in the finals propelled Prep to the top of the podium, thanks in part to senior setter Margo Sudzina, who dished out 15 assists and a pair of aces, while sensational sophomore Mya Kattula notched a nine more assists of her own as well as six kills in the final. The Irish have now notched a 25-6-2 record on the season with seven regular season games remaining.

Over in Franklin, Tennessee Nolensville took home the hardware at the 2022 Border Battle after winning six straight matches, including a big finals victory over nationally ranked Cleveland high 25-15, 25-12. That makes two wins in two days over Cleveland as well as another big win over Briarcrest Christian. That brings their record on the season to an impressive 29-4, with at least one more meeting with Cleveland slated for Saturday.

St. Thomas Aquinas of Kansas took home gold at the Mokan Challenge over the weekend, going 6-0 on Saturday. The Saints notched wins over Bishop Miege, Shawnee Mission NW, Lee’s Summit, Blue Springs, Liberty North, and Liberty. Against Liberty North, Aquinas went wire to wire, earning the victory 29-27, 23-25, 25-13. They held Liberty North to a .108 hitting percentage for the match, and earning 11 aces for he match as a team. Senior Betsy Goodenow (Yale) has been very good now, leading the team in kills on the season with 68, hitting an average of .450. Junior Tatum Grimes is the team’s total block leader, putting up a big 19 on the season, averaging 1.0 per set and 2.7 per match.