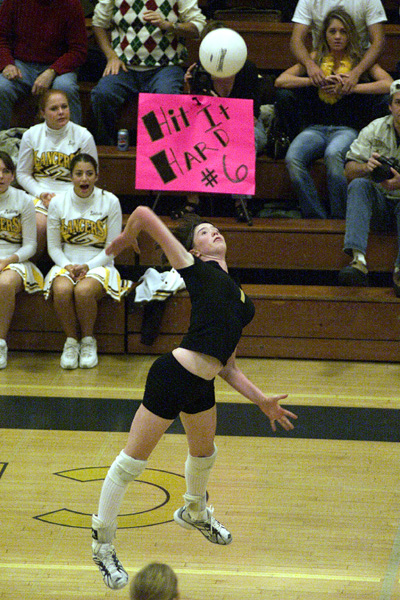 Former star player, college coach and National Team member Cassidy Lichtman explains why she was so passionate on the volleyball court

[Editor’s  note: Cassidy Lichtman was a first-year assistant coach in 2016 when she won a national championship with Stanford University, her alma mater. Lichtman, a two-time First Team All-American during her playing days, wrote thoughtful articles for PrepVolleyball.com during her high school days at Francis Parker, where she was a two-time California state champion. This was her first, written as a 15-year-old sophomore. Be inspired]

We wake up at the crack of dawn, drive for hours, and spend the whole day in the gym. We go to practice after a long, stressful day when we still have piles of work to do. We spend countless hours working with trainers, and running sprints until we are not able to take another step. Then we get up the next day and do it all over again. And our parents are there every time to drive, to feed, and to cheer. Why? Why do we play this game?

We play for the purity of the game. Volleyball is the essence of a team sport. No one person triumphs, and no one person fails. One player does not win a game. It is all the players who come to practice every day and push themselves, and each other, to get better. When you are up, your teammates are there to cheer you on. When you are down, your teammates are there to lean on. You have five other girls on the court that you can depend on to fight with you every step of the way. This requires a trust that is not seen very often. Unlike some other sports, one player down may hurt the team, so each player must play her role. The burden cannot be placed on one star player because she cannot win on her own. The best player in the world without a team is nothing.

We play for the feeling you get when you hit the ball. You soar through the air and for a moment you are suspended, waiting to swing. Two pairs of hands go up before your eyes as two girls strive to block your ball. But you see the one spot they left open. Your arm comes through like a whip and you contact the ball. The ball hurtles through the air and bounces off the ground, missing the arms and bodies flying towards it. Your team cheers and a feeling of victory and strength rushes over you.

We play for the challenge of digging a ball. The hitter and the ground try to play a game of keep-away. Your continuous struggle is to never let them win. The opponent uses all of her strength and the ground pulls the ball towards it. But suddenly you fly through, seemingly out of nowhere, and the ball pops up, a perfect dig. Whether it is the hard-hit ball, the diving up, or the pancake, you triumphed in the one-on-one battle. The glory of the play goes to the girl that pounded it down after your up, but the secret victory is yours because you answered your opponent’s challenge.

We play for the magic of a setter’s hands. The ball is passed and rockets off of the girl’s arms spinning and twisting high in the air. It finally comes down and up go your hands. The ball goes in for a split second then emerges gracefully and floats across the court. You can be on your knees, jumping to save a ball from crossing the net, or trying to clear a fallen player, but soaring through the air or sliding across the ground, you set the ball. You think a million things a minute: the size of the block, the strengths of your hitters, the speed of the ball. No matter how many thoughts race through your head, though, the ball reaches your hands and you set. Not only does the ball come out clean, but it also goes to the right spot at the right time. How many games are there where you have to send a ball through the air without spin to a precise point by barely contacting it? This is why we depend so much on the setter’s magic hands.

We play for the moment when the ball hits your hands and goes straight down on the other side of the net. You put your hands up, then wait until the last second and cover the hole that the hitter wants to hit through. You crush her hopes of the perfect hit. The most satisfying thing is the energy transfer that this simple action causes. The block causes more excitement than almost any other play. Just as important, though, is that it causes anxiety to the hitter. She lost the point and the team lost its confidence. By stuffing her, you stole her glory and their energy.

We play for the strategy of the game. Volleyball is not only a physical sport, but a mental one. When both teams are too exhausted to jump, too tired to run, and drained of all energy, the team who can play smart will win. The team who can push itself past the barrier of exhaustion will win. Every part of the game requires thought. The defense reads the hitter, remembering her tendencies. The setter analyzes the success her hitters will have against the block. The hitter watches the other side and sees where the defense lines up. The server sees holes and serves them. There is no greater pleasure than seeing an opponent get taken out after you beat them with not only the strength of your serve, but the location. The best part, though, is that when you have played long enough all this thought becomes natural, and you can just play.

So remind yourself why you play.